A Review of From Hell to Breakfast by Cynthia St. Aubin

Not the most inspiring of Devil Costume Accessories

A Review of Fallen Angel: Book One of the Succubus In Love Trilogy by Becca Lusk 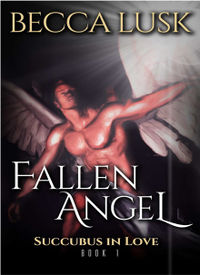 Fallen Angel: Book One of the Succubus In Love Trilogy by Becca Lusk

Over the past while, I have been reviewing the works in the The Naughty Succubus series by Becca Lusk. The author has released an encompassing work which collects this series into the first work in the Succubus In Love trilogy. You can find my reviews of the individual work in the series  firstly here, second, and third reviews are here. The fourth, fifth, and sixth can be found here. The seventh, and last part of the series was reviewed here on the Tale as well.

I’ve said many times that story matters. That it isn’t enough to show succubi as being sexy alone, that they are more than what they are. Telling the story of ‘who’ matters. When a particular ‘who’ happens to make me smile, and adore them dearly, that is a wonderful thing. More so when the fullness of the story can be told and told well.

Nothing Good Can Come Of This.

Trip Taylor is a ravishingly handsome young man. He has a stable job, is nice to animals, and a good friend. But he’s a bit unlucky in love. And by bit, he’s very unlucky in love. Trip just can’t seem to find the right woman. They either seem to get bored of him, don’t even give him the time of day, or are more attracted to his more extroverted friends. That is until Krys shows up – a supernaturally sexy, mysterious succubus from, well, not from this realm. She ends up showing Trip things he didn’t even think he could know about himself.

Has Trip found the love of his life? Has he found his eternal bondmate at last? Why then, after a beautiful encounter, does she get so very mad at him?

Krys is head over heels in love with this human. Trip is gorgeous. Seriously nice muscles. Captivating eyes. He really pushes her buttons. But he just doesn’t remember what she needs him to.

That is, until her friends join in.

Toss in a few Archangels, some Heavenly hosts, several demon swarms, a rather mischievous Queen of Succubi, and some very, very sinister forces and Trip is going to have no choice but to piece an eight thousand year love story together or risk seeing the end of eternity because of him. But will Krys still be willing to take the gamble on the handsome human when it all goes down?

Based on the series, The Naughty Succubus, come take a stroll in this supernatural love story between Good, Evil, and everything in between…

There are some things that Krys knows. She’s in love, she lost that love, and now she’s found him again. But she also knows he doesn’t know her, she needs him to remember. She also knows there’s big trouble all around them and if they don’t find the answers they need, things are going to be more complicated than they are.

The series, now as a single work, is allowed to come fully into its own, to tell the story of Krys, her love, and those around them both. The editing of the series into this work means there are some finer points which are delved into a bit more, some needed corrections made and overall a more solid, strong and captivating tale is brought fully to life.

The humour is lovely, the love is telling. The erotica simply fits the characters, it doesn’t overwhelm the story and works hand in hand to tell who the characters are, but also why they make the choices they do. The story matters here, it’s important and it is told in the best way, that the characters grow in the telling.

With the editing of the series into this single work, there are some points that didn’t quite come out in the series and the editing has helped to make things more clear. Additionally, the author has added a closing chapter to the work, something that really does need to be read and I do hope those that have read the series will read this chapter as it is very important to the work.

The addition of a closing chapter in which Chaos comes to life, telling what is wanted, and tugging another character into the present worked quite well and sets a path to the second series and work to come. Where the series is going is hinted at, telling something of the conflict to come, but also leaving an important question unanswered, which is a neat little tease.

I feel like in this collected work the story has been told in the best way possible. There are still a few minor editing issues, but the work is a far better telling, a fuller representation of the characters. It is a stronger story, a more passionate one. Dearly enjoyed, read with a bemused smile much of the time, and a particular Succubi Queen is her mischievous self.

Whether this universe needs to be concerned, or grateful, that there are two succubi that have a particular flair for that is another question altogether… But it is a fun one to ponder.

The editing of the series into this work has brought out quite a lot overall and I’m quite pleased that the author did take the time to have things edited further. The additional chapter at the end is important, and ties up some threads towards the next book in the series. Many questions unanswered, much to ponder and wonder over. Which, I am quite sure, both Krys and Tera will be. Somehow one with a bemused smile and the other with love in her heart I would think.

A wonderful story, delicious characters and moments. The little moments of joy, the conflict both within and without. It’s lovely when a story offers so much to enjoy and then delivers upon that promise.

Postscript: I need to thank Becca for dedicating this first book in her trilogy to a certain red tail Queen of the Succubi… Sometimes you happen to cross paths with a sister you never knew you had. For that, and more, the thanks are mine sweetling…