This costume has the Shine, not sure about the Sizzle

A Review of Ravished Before Sunrise by Lia Davis 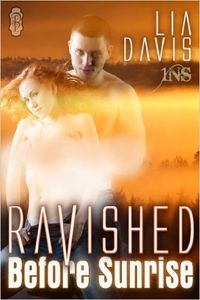 Ravished Before Sunrise by Lia Davis

There was a series, quite some time ago, called 1Night Stand and in that series various kinds of supernatural beings found themselves on unexpected dates. Some of these happen to have a succubus as one of the characters, but they knew they were a succubus. This work however doesn’t have that aspect, in that the main lead character has no idea she is a succubus and I found that interesting.

It is said that sometimes two souls are attracted to each other because the universe wants things to be that way. The larger challenge is when one soul has no idea why things are and the other cannot believe that they are.

Born with the unusual ability to see what truly lies in the shadows, Emalee Black is stuck between two worlds, the paranormal and the human. Neither one accepts or understands her and she’s forced to live a quiet, boring life in hiding. When her best friend mentions 1Night Stand dating service, Ema chooses a role-playing adventure straight out of her romantic fantasies. She’s to hunt her very own vampire and have her wicked way him.

Vampire Darian Wyman is surprised when his daughter signs him up for a one-night stand with an exclusive matchmaking agency. At first he’s appalled by the idea, but as he reads the details of the date, he becomes intrigued. For one night he will get away from the life he has long grown tired of to be hunted and captured by a would-be huntress. But he has plans of his own for his little vixen.

However, when Darian discovers the truth about Ema’s inhuman abilities, the date could end before it gets started.

Emalee finds herself roped into going on a date, but one in which she believes her fantasy of being seduced by a vampire might come true. Darian on the other hand, is a vampire who’s daughter has pushed him into one as well, even though he has little desire to. When the date begins, neither expects the events that unfold, or the secrets that are brought into the light.

Both of the characters in this work are fully realized, having their own histories, faults and strengths. In their thoughts and voices comes a clarity that both of them have needs to be fulfilled, but coming to terms with those needs is where they both struggle and, at the same time, can help each other.

Emalee’s path through this work is interesting for the fact that she is a half-Succubus, is unaware of this, and doesn’t realize why she is able to see what she can. As Darian is a vampire, he knows what Emalee is, but not who at first and that brings a lot of tension to them both. Telling of their past, why they are both on this date, was a mix of bemusement and sadness in a lot of ways, but it did help to set out who they both were and why they took this chance.

The roleplaying scene is cute, having some neat scenes playing out in it and if the story moved from that point to them starting a relationship, I would have been quite happy with that. However, there is a bit of conflict tossed in that I didn’t feel made a lot of sense, really wasn’t explained, and almost immediately vanished into thin air once its purpose was done with. It was a bit formulaic in how that was told and I just feel like the two characters would have been moving in the same direction without it being there.

Eventually Emalee learns what she is through Darian and it is a rather quick rush to get that explained, some fear and doubt to creep in, and then it is past. I would have loved to have more time spent in the explanation, the moment of coming to realize why things are by Emalee. Still, what was given worked to move the story onto some lovely erotica.

While Emalee it told that she is a succubus, and the explanation makes sense from her perspective, there’s really not all that much time spent in showing her powers as a succubus. I wish that had come out more, especially considering her physical appearance, which I couldn’t help but smile about at a few points.

The erotica comes in a nicely told burn between them both, a choice made, and the connection that forms between them. The erotica isn’t out of place, isn’t odd or strange, but rather brings two souls together in a way that is more story driven than simply having them both together.

The ending completes the story, though it is a bit rushed for what happens in that moment. But the emotions, the needs, and the acceptance are right for both characters and I was pleased to see that the ending didn’t wash over the balance of the story.

Lovely characters, the heat in the erotica is well done. Emalee’s succubus doesn’t quite come out as much as I would have liked to see, but the hints were delicious.

A cute and fun story with two characters that really do mesh together well. Lovely heat in the erotica is matched with a story in a good balance which I enjoyed. While the story had love and more, the handling of Emalee being told of her true nature felt rushed and thin in a part of the story when some more time spent in that discovery would have added much to the work as a whole.