Lesson Plans – Part One By TeraS

A Review of A Twisted Pact by Maria N. Lang 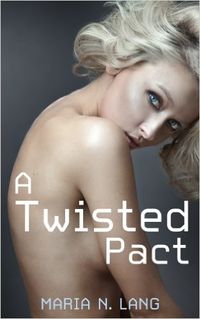 There are certain themes that, for my personal taste, I don’t particularly enjoy. One of these is having a character suffer their way through a story, the other is when a succubus is just stereotypical in nature, having nothing really of interest in them that I can see.

There are those moments when one decides to do something because they feel like there’s nothing else to do. Giving up isn’t a solution, it only creates more problems. Sometimes you need to see your own worth and make do, than to think the universe is willing to give you what you want without taking a price from you.

Another year passes without Summer finding a partner at the fertility fest. The men are afraid of her due to her magical powers. The frustration drives her home to summon a pleasure demon who might sate her lusts in place of a man. Summer, however, is still an apprentice, and the demoness she summons is far beyond her ability to control. How will she resist the succubus’ allure? Without the ability to say no, Summer fights to be released. It is a losing battle, as she finds herself driven deeper into debauchery by the demon’s irresistible powers of pleasure.

Summer takes a risk and using her new found abilities to summon a succubus to find some pleasure in a world where she has none. The succubus arrives, but the pleasure isn’t what Summer expected, nor is the succubus herself.

The work is, as a whole, rather a sad story from the beginning to end, there being an air of depression, loss, and hopelessness from Summer that takes so much out of her as a character and sets the story on a course that only becomes more painful and sad. This has a moment, a very short one, of some kind of pleasure when Eliza, the succubus, appears, but that is so very fleeting.

Eliza is, overall, a fairly stereotypically evil succubus, hooves and all, and from the first moment she appears, there’s little doubt when the story is likely going to go. Her intentions are clear, she expresses them, and sets out towards those goals. In doing so the story turns, for a moment, towards some well written succubus mind control, but that is soon overcome by what is a series of violent moments between Summer and Eliza.

As the story continues onwards, the erotica becomes more dark, the things that Summer is taken through by Eliza are, at least for me, bordering on pain and suffering. There comes a point in the story when the heat isn’t there anymore and soon after the climax arrives and then a conclusion which is rapidly passed through before the story comes to an abrupt, and expected, ending.

The emotions in the writing at the beginning of the work are very good and it showed promise for the rest of the work. However, once Eliza appeared, that emotional impact was pushed aside for the erotica and in doing so there felt like a good story was cast aside for the sake of the erotica itself.

Just too violent, brutal, and really stereotypically so for my tastes. The hint of succubus mind control had some promise, but by the end the story turned a corner and lost me along the way.