A Review of The Naughty Succubus Part 6: Revelations by Becca Lusk

No burning, little desire in this costume really

A Review of Spicy Dinner for Three by Lusty Soul 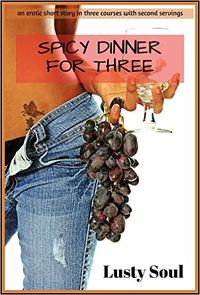 There are certain things that a story should have to tell, the main one of these being that the main character should be able to tell their story. It is a balance, to be clear, between the need for story and, in the case of a succubus character, the need for the erotica that comes hand in hand with that.

But a succubus is not her sexuality alone, no matter how powerful that may well be. There’s history, meaning, a past that means every bit as much as the present that she experiences. Telling the other side of the story matters too.

Lucy accepts an invitation to her friend Sabine and her boyfriend’s house to celebrate the turn of the year with them. As January 1st is Lucy’s birthday, she has a special treat planned for her friends. Sabine and Lucy have cooked up the recipe together, and Sabine’s boyfriend Marc will be the lucky guinea pig that will get the first taste…

Lucy is Sabine’s first lesbian lover. But she’s in a very satisfying relationship with Marc, whom she loves to death. The only option she has to pursue her romance with Lucy while staying faithful to Marc is to bring the two together. Lucy, a succubus and master seductress, whose wanderings have brought her into the lives of many couples, knows just how to make that happen…

Lucy is a succubus who finds she has more than one lover and she loves them both dearly. Her powers ensnare them all, take them to the heights of passion and offer Lucy what she needs, and what her lovers crave. Passions unleashed by a succubus are powerful, but more so when they are reflected in the needs of the ones they are with.

The work is a series of three hot flashes that are lightly tied together with a bit of story to connect why things are turning in the direction they do. There’s lovely heat, the characters fit together so very well. There’s a telling of how they see each other, what Lucy, the succubus of the work, needs from them and how she goes about both gaining what she needs, but more so, how she returns that need to her lovers.

I like a balance between erotica and story and in this work I felt that a lot of emphasis was placed upon the erotica to the expense of the story. I would have liked to know more about Lucy’s past, who she is and so on. That didn’t come out in the work and I really wish it had because Lucy herself is a fascinating succubus character to me.

While Lucy herself is a bit of an enigma, the relationship she has with her lovers isn’t, and while that makes up for a lot of what’s missing to be told about who Lucy is and how she thinks of others, it doesn’t give as much story as I think there should have been. I’ll note that the author does comment upon their intention to write a following work which seems to point to an explanation of, if not how Lucy became a succubus, then at least her history. I hope that answers a lot of the questions I was left with when I finished this work.

The erotica is wonderful, I wish the story that came with it was as well told. Defining the story of Lucy needs to be something told, really it makes up who she is. As it is right now, all we know is that she is likely a succubus, people can’t resist her, and she lives for sexual encounters. There’s something more, hidden and it needs to be seen.

This feels like the second work in a series and not so much the opening of one. Once familiar with a character, then the focus can, and should, be more on their actions than their past. But there still needs to be something to ground one in the story through that character other than the erotica is amazing…