Succubi Image of the Week 440

A Review of Lillian Possessed: The Embrace and The Exorcism by A.C. Lords

A Review of The Devil’s Sin by Carlton Lamberth 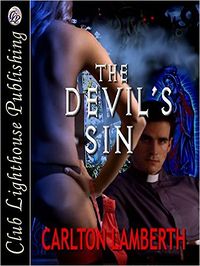 The Devil’s Sin by Carlton Lamberth

I dislike stereotypical characters, particularly when it comes to succubi. I don’t quite understand why it is that, as a whole, so many authors see the word succubus and immediately write a character that is over the top in her sexuality, but as well in her “evil”. Even if the character must be evil, nasty or otherwise, there needs to be something more to them otherwise I just find them to be not that interesting, regardless of the events that they bring into being.

Some stories are meant to be tragic things, the ending not giving a resolution or something of hope to hold onto. There are reasons for that, of course, but the trap that needs to be avoided is using what amounts to a slasher/horror film ending and leaving things so very unresolved.

The work’s summary is quite long, but tells almost everything of the plot:

Muriel Healy and her husband Thomas are in the process of moving their family from Richmond Virginia to Charleston, South Carolina. Muriel once believed she and her husband had the perfect life together. This belief is shattered when she discovers her husband is having an affair with one of his college students. Their relocation to Charleston is an agreed upon attempt to reconcile and save their marriage.

In the middle of this move Muriel’s world is further turned upside down by some grim news from her sisters concerning their father. Dying of cancer, Muriel’s father’s end is now near. Muriel and her family divert their travels from Charleston and rush to be by her father’s side during his final hours.

Her dad regains consciousnesses long enough to caution Muriel not to make the move to Charleston. He reveals to her a family secret concerning her mother when they too lived in Charleston many years ago. His revelation describes the demonic possession of her mother by the Demon of Lust — Asmodeus. Muriel’s father dies right after his startling disclosure.

Stunned by her father’s words, Muriel turns to Catholic priest Kevin Brennon for guidance. A family friend, Father Brennon confirms her dad’s fears and concerns. He also reveals his own involvement from the past in an unsanctioned exorcism of Muriel’s mother; an attempt to rid her of the evil possession from this lustful demon.

Future events will lead Brennon to fear his fiendish nemesis may be returning. He worries an evil, demonic cycle may continue through a new generation of this troubled family. He understands if he’s right, Muriel may be destined to become the next victim of the depraved, wicked debauchery known as The Devil’s Sin.

Muriel and her family make their move to Charleston despite her father’s warnings. She will face demonic possession and become a portal for the demon Asmodeus to enter the world of the living for his own decadent exploits of sexual and degenerate desire. Without help Muriel will continue to digress into the world of sinful lust and malevolent evil. Depraved violence, murder and sexual lust will abound as Muriel struggles to survive her own possession from one of Satan’s most powerful and perverted demons.

The single more focused theme in this work is that of loss. There’s so little hope throughout the work that from the very beginning the darkness hangs over every single character to the point that they seem not to be able to have a positive thought, expression or otherwise come to see that there are possibilities.

While much of that can be given to the curse upon Muriel’s family, it does’t quite explain why it is that so many others are drawn into it as well. The succubus of the work, here called a demon of lust, Asmodeus, is also quite disappointing as well. While they are evil and in some ways erotic, there’s an undercurrent of being stereotypically so. In many ways the means to which they act upon Muriel and all those around her, reads very much like a typical horror movie. I found that disappointing because the temptations and means to influence others really revolves around the use of sexuality and misdirection.

By the time the conclusion appears, it becomes really the expected horror movie ending and that I honestly expected from the rest of the work to that point. The story was just driving towards the nearest hint of redemption but, of course, there has to be a little twist in the ending and it isn’t anything other than stereotypical really.

For the length of this work, I expected some character development, some meaning to the story, perhaps one or two characters coming out the other side in some better way. I’m not really sure that came to pass because the horror aspects of the work smothered any real development overall. To be clear, this isn’t a work of erotica, nor was it meant to be. The erotica in the story is incidental at times and leads towards the moments of horror otherwise.

The writing is very good, the characters have clear voices. The plot is clear, at times however telegraphing the story to come. For me personally it is the sense of so much being stereotypical in its nature that brought about my disappointment. To tell the story of “evil”, whatever it may be, needs to have something different, something unique, to make the story stand out some. Falling back on tropes doesn’t make that happen. Especially when it comes to succubi.

Really no hope to be found, a succubus that is all but stereotypically evil in her nature. An ending that is completely expected and almost rote in how things transpire. I didn’t find much to enjoy in this work, and I think most of that comes from the characters themselves. There’s so little positive aspects in them that the work is muddled with being concerned with how things fall apart and less so about what might be better.