A Review of The Incubus Journal: Chapters 3 & 4 by The Mad Hatter 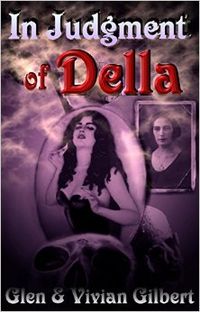 In Judgment of Della by Glen and Vivian Gilbert

There are some stories in which you must, always, be paying attention in order to try and define what is happening in the story, the characters and the world around them. Regardless of how convoluted the characters’ thoughts may be, to how odd the events might seem as they transpire, focus on understanding what matters is important.

The loss of a loved one can change you, your view of the world, and what everything means to you. Your wishes can, at times, get the best of you, and sometimes they get the better of you. In the end, what is real and what is your perception tells the real story.

Widowed Irish Watchmaker copes with life during WW2. A customer disappears, his apprentice explodes and the spirit world beckons. Nature abhors a void–and so his long suppressed passions challenge his very soul.

Albert is making his way through a world that is at war. But that war isn’t just the world, but within himself and how the world is seen through him in the wake of tragedy. Events conspire to bring about the impossible and Albert is given a choice to make.

The work is focused upon Albert’s perceptions of the world around him in the wake of his wife’s passing and how much that has effected him. It isn’t just in how he seems himself, but more it is the way his desires and needs seem to be reflected in the world around him and how the events that he is drawn into change him slowly through the story.

At one point the need Albert has for his wife is expressed in an event which turns the story into something that is bit confusing at times, but regardless of that, the almost constant wishes that Albert reflects on push things onward.

There is a character who seems to be a succubus and likely is one, but isn’t quite expressed in the work as actually being one. But the signs of horns, a tail, and an overwhelming sexuality seem to point towards this conclusion. She draws Albert towards making a choice which has consequences, and in being so, makes the conclusion of the story very poignant.

The writing is very complex and a reader needs to be paying attention throughout the work otherwise it is very easy to lose one’s way in the middle of the work and not be sure about what is going on. This is because Albert’s internal monologue and perceptions are twisted, changed, altered. There are moments where reality and fantasy become very blurred and it is very easy to be confused. Much in the same way, I felt, that Albert is throughout.

I think a bit more clarity in the story would have been nice, perhaps a longer, more involved ending as well. It was a little abrupt of an ending and I didn’t feel like it did the rest of the work well by being so.

Possibly one of the most unique stories I have read in quite some time. A bit difficult to get into and to stay with at times, but that has more to do with How Albert’s perception twists events around him. The inherent overwhelming sadness sets the tone throughout, but the ending I think makes up for that to a large extent.