A Review of Devilish Desires by Monica-Jay Allen

A Review of Urge of the Demoness by Alana Sanford 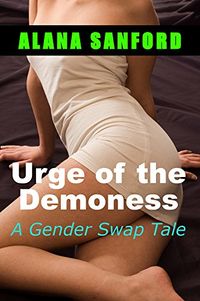 Urge of the Demoness by Alana Sanford

Succubi can be many things. They can be evil, indifferent, or mischievous among other things. To have them simply “do” without having a reason can be a problem. It isn’t enough to have a succubus character just so something for the sake of doing so. There needs to be a reason, some kind of meaning. Really more than anything there needs to be something more than simply a series of sex scenes tied together loosely.

Transformation, mind control are two themes that can be used. But that alone isn’t enough, there needs to be something to possess the main character to do the things they do. Even if the reason might come to a succubus that knows her way around a stripper pole.

I was once a man, a great accountant. I messed with fire and she messed back. I summoned the demoness to give me back my youth. Will she give me back my manhood? Will I remember it? Will I even want it back?

Greg wants things as they were so long ago. Summoning a demon seems like the best way to turn time back for him. But Cheresse has other ideas and Greg soon finds that being young is one thing. Being Jasmine is something all together different.

The story is mainly focused on Greg summoning Cheresse and how she takes control of things. Eventually that leads to Greg being transformed into Jasmine, the telling of an encounter with his roommate and then the twist in the story comes from there. Overall the plot has its moments, there is some nicely written succubus aspects to Cheresse and overall she doesn’t seem to be very stereotypical as a whole. She is very persuasive, there are some hints of succubus mind control, some domination and overall Cheresse is interesting as a character.

Possibly the single part of Cheresse’s initial appearance that I liked the most was her taking control of the situation and when Greg suggests Cheresse has a stripper’s name, she demonstrates her talents about one. That single scene made me smile and I found myself liking Cheresse quite a lot, hoping for her to be more than just a means for the gender swap.

The erotica is a pair of hot flashes, one very short and having little heat, the other a bit longer but, again, there’s a lack of real heat as well. In one case that has a lot to do with Greg, post transformation as Jasmine, and her reluctance to do what Cheresse wants her to do. It’s awkward, uncertain, and as such that did work well all things told.

By the time the climax comes, and what Cheresse really wants is revealed, that leads to a twist in the story that wasn’t expected. While that worked, and made sense, it happened so quickly and left really no time for the story to do anything with the event. It does allow for a bit more succubus mind control, which points towards another work in the series to come and that could be very interesting.

The work is short, really there needed to be a bit more time spent on Cheresse, more focus on Jasmine’s internal struggles as well. But most of all, the sudden twist and then rapid ending of the work was disappointing. That could have been drawn out more, become a bit more solid that “this happened, moving on” which bothered me.

The writing is good, the erotica could use more heat. The characters are interesting, certainly Cheresse is, Greg/Jasmine as well. The dialogue needs some polishing, but overall it sounds good and each character has a clear voice. But it is a short work and really it could have been at least another ten pages long to really develop the story and actually set up the series better. As well, the author needs to name this series, that would be helpful.

Three and a half out of five.

Hopefully a series will come out of this, the opening is interesting and shows some promise. I will be looking to see what happens next if nothing to see how good a stripper Cheresse might really be.  After all, seduction is but one part of being a succubus. The other is in bringing about the desires of another… whatever they might be.