With You By TeraS

A Review of Tangled Limbs by Natalie Severine and Eric Severine

A Review of The Devil in the Detail by Jewel Jones 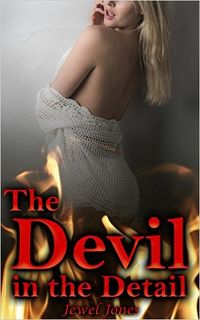 The Devil in the Detail by Jewel Jones

There are some stories that offer a Succubus, or Succubus-ish, character that seems to be interesting. Perhaps that is in their attitude, their appearance, something that seems to suggest they are meaningful to the work in question.

Sometimes what is offered doesn’t quite work out for several reasons. Much of the time that comes to using the Succubus as a means to get to the erotica, the transformation of another character and then they simply vanish never to be heard of again. That’s a shame when there is so much detail in them and it doesn’t go anywhere. Even if there are hooves involved.

Summoning demons isn’t too difficult if you know what you’re doing, but when a she-devil shows up in Andy’s pentagram, he’s in for a surprise. The only thing he ever wanted was a chance to get laid, but the demon won’t help him unless she can turn him into a girl. It doesn’t seem like a bad deal, but his new body comes with a few kinks, and Andy is about to get tricked.

Andy has made deals with a certain devil before, however this time the summoning reveals that the old deals he had made aren’t much good anymore because there’s a new girl in town and her name is Surazin. The seductive succubus offers a deal with a catch and Andy signs on the bottom line, but one should always be aware of the fine print and the meaning of the words they agree to.

The work is a gender transformation hot flash which, in the beginning, offers the appearance of Surazin, who seems to be, at least partly, a Succubus through her mannerisms, attitude and looks. She’s seductive, crafty, and uses all of her abilities to draw Andy into signing a deal which, of course, is twisted in a way that works to her advantage. I liked her description quite a lot, being sort of a business woman slash librarian and as such she’s so very tempting in a lot of ways… save that she has hooves which, for me, completely wrecks everything else that her sexuality and seductiveness offered.

Once past the deal itself, which does have a few words in it that catch Andy and cause things to turn very wrong for him, the buildup in the first third of the work is tossed aside for Andy’s mental transformation into a bimbo, which takes less than a page, some self-exploration and then, of course, he, now a she, finds herself in a sexual situation with her roommate. The erotica is what you might expect, really special or unique as a whole.

The problem is that Surazin could have been so much more than she was, but she’s really only there to facilitate the transformation and then she is completely out of the rest of the story, save for a passing thought from Andy at the end of the work. It’s a shame because there could have been a lot done with what was, at least to me, the most interesting of all of the characters.

There are hints about her, how she came to be, and doing, what she is, but that’s only mentioned fleetingly. There could have been some more teasing, perhaps more time spent in Surazin’s transformation of Andy, something to make her be more present in the story. I would have been just as interested to have her there with Andy and her roommate when the erotica started to “push” things along in some way.

Not enough detail and far too much focus on Andy being a bimbo and not a lot more. That’s a shame because the beginning offered an interesting Succubus and didn’t use her all that well. In this case the details were less being a devil than they were being left behind in the wake of the erotica.