A Review of The Devil in the Detail by Jewel Jones

At least someone was trying to make this Succubus costume sexy

A Review of Tangled Limbs by Natalie Severine and Eric Severine 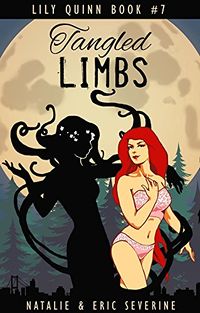 Lily’s story is one in which she is very self assured, confident and, for the most part, her actions have never really caused her to have to face their consequences. That leaves a rather large hole in her personality that needs to be filled. Sometimes that takes seeing someone important to her slipping away. Sometimes that takes the realization that events are spiralling out of control. Either way there is a cost that will have to be paid.

My name is Lily Quinn and my life is a strange one, I’ll admit, but it’s mine. I hunt monsters for gold and even when my plans to get them in bed go awry, I’ve still got my sex-fueled supernatural strength, speed and senses to take them down. I always get the job done.

Right now, I have two jobs: take down a particularly bloodthirsty vampire, and make sure that Max’s new girlfriend is good enough for him. Two tasks of equal importance, if you ask me. Both of them seemed to be going just great, but then Max asked me to take a look at something, damage that reminds us both of a werewolf.

No one’s said anything about a werewolf in the city, but there’s something out there. Something dangerous. Well, that’s what they pay me the big bucks to hunt down and deal with. Now I need to figure out what I’m up against and how to find it.

I’ve got some long nights ahead of me.

When Lily is invited to dinner, anything can happen. When that involves Max, her best friend, and his new girlfriend, things get more interesting than just playing Truth or Dare. A new job catches Lily’s attention and in trying to figure out the answer to the riddle, she finds that every action has a consequence… and Lily is responsible for this one.

The thing that I liked the most about this work was the moving forward of Max’s life, telling of what’s been happening with him. Seeing that his life is getting somewhere and that Lily’s happy for him, supportive of that, and wants the best for Max leads into a wonderful story in itself. To see Lily being challenged by someone that cares about Max as much as she does matters here. While that does turn into some very hot erotica, the author took time to develop all three characters. The sex is secondary to telling something about Lily, about Max and introducing Taya into the mix.

What this all goes, and what might be the result, I have to admit worries me. There’s a sense of foreboding. Something will happen, it might not be the best of things, and if what I think will happen does, that could shatter both Lily and Max’s lives. But before such things might, or might not happen, there are moments of joy, pleasure, fun and desire.

Beyond the main characters themselves, the secondary plot of Lily trying to solve a mystery seems a bit lost at times. It does allow for some more of Lily’s world to be revealed to her, and to us, but it’s a little scattered and uneven. There are some cute moments of revisiting some of Lily’s past adventures, which have some really funny moments though.

At one point Lily comes to the realization about what’s happening and in that moment comes something we haven’t seen from Lily before very much. Her sense of self, of worth, of being something more is assaulted by events out of her control. The guilt is palatable, there is no question. But also comes a certainty within Lily. She needs to make things right.

That then is what matters most here. It isn’t the erotica, it’s seeing Lily do the right thing, even if that means making the most terrible of choices. In the prior work Lily had to use her mind. In this one a part of her soul is harmed. Perhaps this is how Lily’s real story, of who she is, can begin to be told.

Written well as always, the erotica has lovely heat. But I wish there was more time spent in telling about the world being revealed to Lily. I’d like to have seen more of Taya and Max. But this series is mainly told from Lily’s perspective and she keeps on running. At some point she’s going to have to turn and face her own demons.

I really wanted more character development, more time spent in the core of the series, but that wasn’t to be. Still, Lily had to face something she hadn’t before, making up for a mistake and living with the consequences. Lily is more than the sex she has, and it’s when that comes to the fore that the series is at its best. Still, there is so much not revealed about Lily that needs to be. Hopefully the next work in the series will manage that.