A Review of Loving and Loathing Vegas by Lex Chase

A Review of Reamin’ Demons by Alana Melos 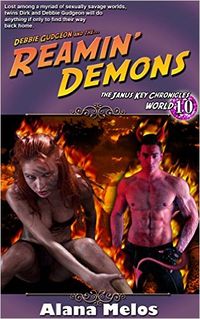 A review of the latest work in the Janus Key Chronicles series by Alana Melos. The series follows a brother and sister on a rather interesting quest through time, space and mythology which means, of course, that at some point one of them has to visit Hell. That means, of course, that someone becomes a succubus and discovers what that’s like.

Generally, that sort of story turns very stereotypical, very quickly. However, in this case, while there is the erotica you would expect, there’s something more. The succubi are, and this is what captured me, theologians and librarians at heart. But, of course, they are the most sexy of them… glasses and all.

The work tell the story of:

Trapped in a sexually savage world…

Having escaped from Valhalla, Debbie now finds herself in hell… for real! She’s in the body of a sexy succubus, filled with lusty thoughts. Our heroine decides to take matters into her own hands, seeking out partners to power the Key of Janus to get her out of there… but Lucifer, the Prince of Darkness, might have other ideas!

Debbie has a problem. She’s in Hell. Actually that’s just the start of things. She’s been turned into a succubus, there are a lot of demons out there that look good enough to eat and she’s hungry. A little nibble can’t possibly hurt, she’s had to do that before. This time however, her new needs might get her into all kinds of trouble.

Debbie’s transformation into a succubus isn’t shown, but all of her prior transformations never have been in the series. While that is a little disappointing, the effects of her new form do give some really interesting moments. There is a little bit of mind control, mostly in a personalty change driven by her succubus needs, that I really liked. It doesn’t turn Debbie into a submissive little sextoy, it gives her some power in the world she finds herself in. That new personality brings a lot of heat to the story and to the erotica.

Eventually Debbie meets other succubi and while the story to that point, Debbie being a little “succubish” I thought worked well, the revelation about the succubi I just adored beyond words. They are succubi, there’s no question from their sex drive, their sexuality and seductiveness, but they are more than that. Seeing them learning, studying, talking about theology, realities was for me a special thing. More than that, the hints of their powers being so strong that the rest of their world trembles at what they are capable of made me smile. The succubi might not rule, but they seem to have a hand in things.

The erotica is a little over the top at some points, but overall I liked how Debbie acted as a succubus, how the other succubi dealt with their sexuality. There is a scene where Debbie dominates some demons sexually, and that I thought was very hot and deliciously told.

While there was so much I liked about this work, the thing that was missing for me was delving into succubi society more than happened. Really the story skimmed over this point, offering it as a tease more than anything else, before moving on to Debbie’s encounter and climax of the story. It felt like a bit of a cheat, considering how much storytelling could have happened, but didn’t. However, after skimming over some of the other works in the series, this tends to happen quite a lot and if I had been following the series I would have been prepared for that.

The writing is very good, it has to be considering that the author is ten works into the series at this point. The characters have depth, soul, personality and more. There’s a good deal of time taken to develop Debbie’s character and tell more of a story by doing so. Well done and I liked all of that very much, but I still wish there was more time spent with the succubi themselves here.

I wish there had been more time spent exploring the world of the succubi more than anything else. The little teases about the power they have, what their aspects are, the succubi themselves I just adored. It’s a shame that the series will likely never revisit them, tell all, show what the reality is. But I will keep the thought of a collective of succubi who have the time to learn, discover and discuss theology as easily as they breathe and look sexy doing so.

For that says they are more.