A Review of Succubus by Lacey St. Claire

A Review of The Naughty Succubus Part 5: Clarity by Becca Lusk 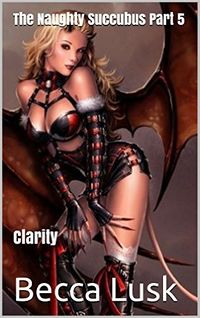 A review of the fifth work in The Naughty Succubus series by Becca Lusk today on the Tale which will bring me up to date with the series so far. The first work was reviewed here, the second I reviewed here, and my third review can be found here.

The single most difficult thing to overcome is the question of dogma. Being told that there is nothing you can do, because that is how things are, isn’t an answer. It’s an excuse. The choice to ask why, to try to come to an understanding isn’t a weakness, and sometimes it takes one soul to believe that anything is possible, if she can believe in herself. Sometimes that’s a hard thing to do, more so when you need to accept that you can’t make things right on your own.

The classic definition of a succubus is that of a demonic creature that tempts men as they sleep, steals their essence to feed themselves before moving on without a care in the world. But what happens when a succubus has the misfortune of falling in love? And to further add to the heartache, when the weight of the multiverse rests upon their lover remembering who they are? When ancient evils awaken, people you once thought were enemies end up being allies and long held beliefs, dogmas, and doctrine are put to the test.

Come join Becca Lusk as she weaves a timeless tale of lust, defines what it means to be sinful, and changes the perspective on those acts we condemn as lewd. Because when the universe hangs in the balance, it’s no time to be squeamish.

Krys comes to reflect on her past and in doing so recalls the moment when choices needed to be made. The memories of the past offer clues, but also mysteries to solve. As this tale is told, Krys has to accept she cannot solve everything and needs to trust in someone else. Her heart will suffer in doing so, but sometimes you have to trust. Even if her name is Tera.

While the title suggests there will be some kind of clarity with regards to what is going on, this really doesn’t quite happen. While there is quite a lot told about the past, how Krys and Gabriel met, something of what happened in the past to put Trip in the place he is in, there’s a few pieces missing to the puzzle.

Much of the events in the present are reflected in the past, there are connections made in which some of the motivations of the characters are suggested. Quite a lot of time is spent setting up the conflicts of angels and demons, where things came from and how the events of the here and now started to come together. In doing so that opened things to telling the larger story which, along the way, involves a certain red-tail named Tera.

Tera’s appearance is, as a whole, quite seductive and mischievous, which I thought was delightful, but while she does push the story forwards, reveal a secret, and manages to push both Trip and Krys to the limit at one point, being Tera needs a little bit more. That will come, in time, but for this moment, being that she has what seems to be an important point in the plot, I’m really wanting to know what that will be.

There is a little bit of erotica, but overall the point of this part of the series is to explain where the characters come from, what happened before to draw them together. Not everything is explained, the past is still mostly unclear, but if nothing else there’s a point to be made.

That comes to the question of why angels and demons do the things they do. Why things are how they are. More importantly, is there the possibility of change. It’s that question that draws me to this series. Can one question not just themselves, but the universe as well? What can they do about it, and what happens when the rules are found not to be just uncomfortable, but simply wrong on so many levels.

The writing seems much more focused, the storytelling a bit more clear. There is some confusion however in Tera’s appearance, how that is told at one point. There might have been a better way to accomplish the teasing of Trick and the reveal of Tera overall. The mystery is still being unraveled, the characters aren’t quite to the point where they need to know what comes next. I rather liked that sense of uncertainty. The trick will be how Tera fits into things, what she really wants, and what, exactly, will be the reaction of those about her and Krys.

The mystery is starting to be revealed, the question of what Tera really wants isn’t clear, though I have my own thoughts about that which I am not going to reveal at the moment. But I think that she’s not going to disappoint me, nor is Krys. There are things afoot now, let’s see where that takes us next then.

A postscript: My thanks, and dearly so, to the author for placing my Succubi self in her series and her well wishes in the dedication for this work that mean the world to me…