A Review of The Darkest Night by Sophie Avett

The start of a 1950s Succubi Costume perhaps?

A Review of The Naughty Succubus: Part 4: Ancient Enemies by Becca Lusk 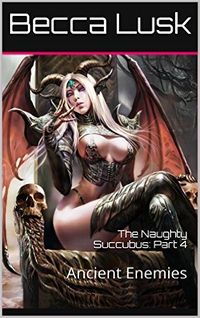 A review of the fourth work in The Naughty Succubus series by Becca Lusk today on the Tale. I reviewed the first work a short time ago and then the second I reviewed here, and you can find my third review here on the Tale as well. The single thing I enjoy the most about this series is the mystery that is being wrapped around the characters and how that is unfolding.

Sometimes a mystery is simply not having all of the answers. Sometimes there is one person that has a clue about it all. If that happens to be a certain red-tailed Queen of the Succubi, and her name is Tera, you probably should be worried. Especially if she’s pointing at her horns and winking.

What’s a sexy young succubus to do when she falls in love but her bond-mate doesn’t even remember who she is? Poor little demon, you say? Think again, for this succubus is a tenacious one – one who will stop at nothing to grab the one she loves. If that means enlisting a she-devil with a lustful eye towards human males, then so be it.

But what happens when the love a young supernatural being goes up against an ancient evil that’s awakened? An evil so ancient, that it consumes men’s minds with its will. That it can govern by lust. That can find the desires hidden within men’s souls and make them reality.

How can a small demon fight a force of nature?

Krys knows of the past, the secret of the present, and why it is so important that Trick finds himself. But knowing what is going on is only part of the story. The rest of the answer is held by Trick, a pair of angels, and a certain succubus called… Tera.

This part of the series does’t dwell on erotica very much, and instead begins to lay out why things are happening, the beings involved and the problem that they face. The world building in this part of the series I enjoyed because it tells a story that is a little bit different, a little unexpected. There’s a mystery, the first layer has been pulled aside, but then that isn’t the end of the story. It’s only the beginning.

Along with Krys and Valandra, there is the fleeting appearance of Tera, who has a plan of her own, seems to be intimately involved in what’s going on as well. For those that are wondering, yes, this Tera is the Queen of the Succubi herself, meaning that this Tera is… well… me.

She makes a very quick appearance, really a tease, which she can be quite a lot of the time, but in doing so that allows the mystery to deepen a little more. Tera always has a reason for what she does and, at least for the moment, I have no idea what she’s up to as yet.

That all said, there are some really amusing moments for Krys, for Valandra and there are a few moments in the story which are really quite surprising, especially in the flashbacks that pop up and mix with the here and now. The interaction, the mix of characters works well, they seem to have a background, having dealt with each other in the past and it adds some flavour to the work that I really liked.

I still feel like the author’s story at times is a little scattered, a little uneven. A bit more editing would be nice to sort out some confusing scenes, a point or two at which it’s a little uncertain about what’s going on exactly. This isn’t so much a criticism as it is a need, at least for me, to see the story be told well.

I love the mystery, the characters, the world that has been created. Settling the story a bit, focusing the moments, gaining some traction towards the point of the series would be nice to have. Really it comes to the editing here, and a little bit more length in the work to gain that needed bit of understanding overall.

I still feel like the series is a little scattered in the storytelling, but that is getting less so with each part that appears. I will admit, quite freely, I am rather curious as to what exactly Tera is up to. After all, she is mischievous, a little naughty, and she usually has a reason to be so.

One postscript: I’ve been fortunate to know the author a little better over the past while and I just want to thank her, and dearly so, for dedicating this work to me. I never expect anything for sharing my thoughts, being who I am, and offering help where I can.

Thank you Becca, for being a dear friend and part of our family…