A Review of Lillian Possessed: The Awakening by A.C. Lords

A Bikini that is perfect for Morrigan Aensland

A Review of Chronicles of a Succubus: The Taking of Celeste by River Neilan 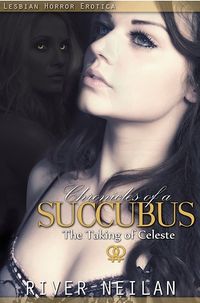 Chronicles of a Succubus: The Taking of Celeste by River Neilan

To write a work of erotica that has heat and passion is not a simple thing. There needs to be a connection to the characters, something that draws you into the story and promises something to come. Historical erotica is possibly one of the most difficult things to write because there is a certain tone, an expected way how the characters should act in order to hold the tapestry together.

If one can manage that, the story can be captivating in its own way. However if the ending doesn’t live up to all else before, then that is disappointing.

A proper lady is about to have a nighttime run-in with a very improper guest.

London, England y. 1870 — Lady Celeste Hallward, six months into an arranged marriage, finds herself lacking something only her husband should be able to provide. Her lack of satisfaction has brought her to the breaking point. But then, in the dark of night, a beautiful, mysterious woman appears in her bed chamber, willing and able to do what her husband cannot. Desperate and yearning, Celeste finds herself entranced. The key to her satisfaction has come in a form most unexpected.

However, what Celeste does not stop to consider is that desperation can entice predators, and some predators are exceptionally skilled in disguise.

Celeste is lost sexually in a world where her desires are not taken into account. It isn’t that she doesn’t lover her husband, it is more that she cannot find the way to express her desires and this leads to her frustration. Awaking to a woman that offers her bliss, Celeste accepts and is taken down the path of her desires… but to what end?

The work is a hot flash of erotica with quite a lot of story around it. Celeste is a well told character with her needs, wants and desires, and they are made clear as the story progresses. She fits well into the historical context this work is set in, her thoughts aren’t “modern” and being so that sets up a framework for the story that remains throughout.

The succubus, who is never named, is described in a way that isn’t stereotypical, and I liked that mainly for the seductive nature of her. She plays upon Celeste’s needs, drawing much from her, and the heat in those scenes is really well done. There’s an aspect of wanton desire in both characters, but it doesn’t go outside of the boundaries of the time. Being so, that adds some depth to the story and the erotica and I think that worked really well.

As the works is told from Celeste’s perspective, the descriptions of touch, of the heat within her, the needs that build through the encounter, are wonderfully told and wrap the work quite well in them. Nothing is over the top, outrageously impossible, or silly. The scene makes sense, and that was a lovely thing as it did so.

The work ends rather suddenly however and in a manner that is somewhat stereotypical in nature. That in itself makes sense in the setting and what happens. Where the problem comes is that the way this work was presented, it seemed as if there was to be another work in the series and that never appeared.

It’s a shame really as the succubus was interesting and different. Following her path from this point onwards I think would be have been quite the read. More so if she passes through time and events in the world and how that changes her, if at all.

Well written, lovely heat in the erotica and being so the story is deliciously told. It is short, sadly, the ending is too abrupt as well. Perhaps more than a single encounter, more being told about Celeste would have made this more than it was. Story matters, this work has that, but with all of the threads left to play with that left me wanting.

A lovely and hot tale that is really well wrapped up in the sensations and needs of Celeste, but the ending doesn’t live up to everything else. The way this work was presented seemed to suggest that this was the beginning of a series, but that never transpired and as such the mystery of the succubus herself is left unanswered.