A Review of Sex Fiends Book Two by Linc Jericho

A Review of White Wedding by Jeanna Pride 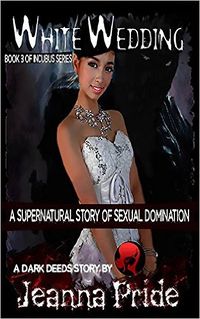 A review of the third work in the Incubus series by Jeanna Pride today on the Tale. In my review of the first work of the series, which you can find here on the Tale, I didn’t really find much that I enjoyed in the story for all of the pain and suffering. The second work in the series continued the rather dark and ominous story from the first and as I noted here, that didn’t really do much for me either.

The third work seems to really not change the formula so far leaving so many questions in its wake, but also leaving me just not really satisfied with the series still.

Leigh and Joe are the ultimate power couple, pledged to each other in holy matrimony. A wealthy lawyer and his beautiful socialite Asian bride to be, they are the perfect couple. But, all is not well in the dark souls of the betrothed. Each seeks something more, something darker. She seeks a partner that knows how to please, and harbors a need to dominate and control, and he needs to be controlled. Into this, Incubus worms his way, taking the form of a domineering black man that wants only to draw out their inner darkness.

Leigh and Joe find themselves pulled into a darker place in which what they truly need comes to the surface. But who is the one in control and who are the ones being controlled?

I found it very difficult to become involved in the story for several reasons. The domination theme that prevails in this work left me cold. Abuse and pain really does nothing for me, though it well may for others however. I wasn’t expecting a happy ending having read the prior works in the series, but I was hoping for more development of the main character in the series and that really didn’t happen.

The incubus remains the same slightly over the top dominant alpha male that bends all others to his will. But this isn’t done through a real desire on the part of those he is dominating so much as it is his pushing his will upon others until they submit. It just feels wrong in several ways, but as a fantasy for some I’m sure they will enjoy it. There was a book once that tried to create a window into the D/s world and it made a lot of money, but wasn’t telling the truth. In a lot of ways this series is playing out a fantasy with not really all that much basis in reality.

I didn’t find a lot of heat in the erotica for all of the pain and abuse that the characters have to endure. That said, the actual characters themselves, that of Leigh and Joe, are well created, have depth and there’s really an interesting story around them. They aren’t cardboard cutouts, there is some meaning to them and that bodes well. The incubus however doesn’t grow as each story is told and remains for the most part static. Perhaps the next work can reveal more about him than has been said, or offered, before.

The incubus still hasn’t a name, and really calling him “Incubus” just seems like a bit of a disappointment. He’s very much an alpha male, the stories pull that to the forefront, but there has to be something more going on than has appeared so far.