A Review of White Wedding by Jeanna Pride

I think the Deva in this costume is missing the Devilish

A Review of Sex Fiends Book Two by Linc Jericho 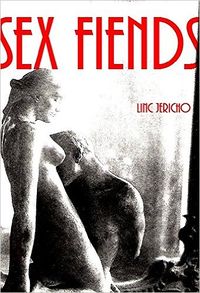 A review of the second work in the sseries called the Writ of the Succubus which in the first book as I noted here, seemed to suggest there would be succubi and incubi appearing, but was being a little coy about that point.

The second work in the series opens the door to telling more of the story, offering a hint of what is to come and in doing so at least answered one question. There are, in fact, succubi and incubi appearing in this series. The question remains however… just what is going on exactly?

Episode 2: Maddic’s initiation into the The Hensing Study on Charisma, Attraction, and Sexuality. Maddic drives into the desert overlooking San Francisco, where Dr. Jonckers is waiting for him with a celebrity.

A story of being trapped by lust and desire, but as well the need to discover just who is in control and who is being controlled as well.

Much of this work is focused upon Maddic having his way with a celebrity of the time this work is set in. It is a bit odd in how that plays out, some of the language used, and what drives both of the characters onwards in their bound lust and desire. If the work was only this erotica, it would be disappointing, but there’s a saving grace and her name is Victoria.

Victoria is far more involved in what happens in this work than she was in the first. She’s controlling things, guiding, and pressing on towards her own needs. When that comes to pass and her revelation appears, it makes a good deal of sense, but doesn’t really answer the question as to who exactly Victoria is. She’s still a cypher, a mystery, but if nothing else, like Maddoc’s own understanding, it does clear up one point about this series. There are succubi and incubi to be found. Now the question to answer is: What is the point of the series?

Lavishly detailed, the scenes are wonderfully told, the characters voices and internal monologue are captivating. The work tends to wander a bit, still trying to find where exactly it wants to go, but there is a better focus. Questions remain, the erotica is a little over the top and distracts from the story overall, but there’s something about the series that interests me and leaves me wondering.

As well written and mysterious as the first work, but allowing for the barest hints of answers to appear. I wonder who Victoria really is and what she really wants. Perhaps that’s the more interesting story than Maddic’s discovering what he is and what he really can do.