A Review of On Becoming a Succubus by Lillian C. Sisk 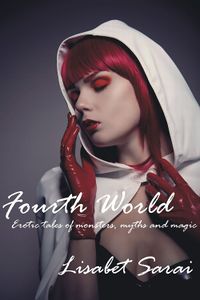 The most common stories about monsters and similar beings resolve themselves to telling a story in which there is more horror than love, more pain than life, and more darkness without having a sense of the light that should be. Telling stories like this can be a difficult thing in that one needs to push the boundaries of that darkness to the limit at times in order to tell the story.

Trying to mix in a little bit of seduction can temper that to a point, but there is always the need to have that moment of shock, of the seduction becoming entrapment. When the story loses the seduction for the blood and darkness, it is difficult for me to enjoy the story for what it tells otherwise.

The work is an anthology collection of:

Enter the fourth world – a world of lust and shadows, where anything can happen.

Obsessive passion and dark ecstasy mark these seven stories of paranormal desire from eroticist Lisabet Sarai. An undead couple hunts for beauty and youth in the history-drenched streets of Prague. A sex addict meets his fate in the embrace of a seductive monster. An innocent writer offers her body and heart to a century-old ghost. A spiritual seeker succumbs to temptation in the arms of a fearsome and greedy goddess. A kinky, blood-drenched threesome unfolds in a luxurious Bangkok penthouse. These tales conjure the magic of sex, and its dangers. Expect to be unbearably aroused and occasionally terrified. Do not expect happily ever afters.

The work is a collection of stories that, as a whole, have a rather darker turn in them, tending towards a range of emotions from simple attraction through obsession. Each of the works tells the story of a particular mythological being, or act of magic, but doesn’t quite come out and say who and what they are for the most part, leaving the reader to figure out things as the stories progress.

The theme that seems to run through each of the works is an initial attraction, something that tugs the characters together and then, when the moment of pleasure arrives it is tempered, or overwhelmed at times, by horror or violence or some other action that in a moment takes the heat from the story and leaves something quite different behind. It is the tailing off of the passions into, at times, loss and despair that makes the works difficult to read, at least for me personally.

There’s a distinct lack of hope, a feeling of disconnect and being so the work as a whole was difficult to become involved with. While there is some erotica, there’s more of a harsher tone to that which I didn’t find attractive. For some there likely will be something in the tone they will find interesting, but I just couldn’t find my way. It isn’t so much a work of erotica as it is a work of horror and mystery with an undertone of erotica to push the story towards its conclusion.

The singular story in the collection which has a succubus-like being is less seductive as it is manipulation and while there is heat, seeing all of the manipulation makes that erotica seem flawed and lesser as a result. While there is a sense of seduction and pleasures offered, there is also a harsh edge to them, an almost aloofness, and it didn’t quite work for me. But as a story on its own, the characters are very good, the textures in the words are excellent.

As a collected work, that is the core. There is excellent writing, good storytelling, and there is purpose to the stories. But the erotica is muted by the harshness of the stories and in being so my enjoyment of the collection was tempered quite a lot.

A slightly dark collection of erotica, but written well and telling some interesting stories. Perhaps too dark at times for myself, but there are some attractions as well.