A Review of Incubus: An Intense Novella by C. De Melo

A Review of My Best Friend is a Succubus: Book One: Summoning by Amanda Clover 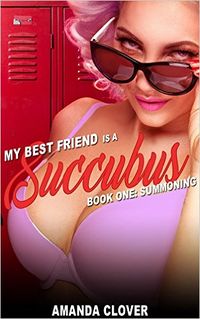 My Best Friend is a Succubus: Book One: Summoning by Amanda Clover

One of the themes that is actually very difficult to write well is bringing a succubus character from the distant past into the present. By that I mean there is a certain tone of voice, understanding, experience, that should lead to a ‘fish out of water’ situation. If that’s done well, it can make things interesting. A review then of the first work in the My Best Friend is a Succubus series by Amanda Clover which has quite a lot I liked, but two things that could not but help give me pause.

There is a cost to everything. Whether that is one you understand or not isn’t the question. What matters more is if you are willing or if you are guided into what happens. There is a difference, but sometimes that can simply be a matter of a misplaced word… or a bemused succubus.

Faith’s boring life is about to get wild!

Faith Granger considers herself to be a chubby loser. She lacks confidence, she lives in books, and she works in a high school library. The closest thing she has to a love life are all her dirty daydreams, but those aren’t enough to quench her desires for football star Maxwell Harper.

Faith discovers a mysterious occult book called the Septagrammaton Codex in the library’s donation box and decides to take it home and try her hand at a love spell. She doesn’t really expect it to work. Faith casts the wrong spell and ends up summoning Morgana, a succubus as beautiful as she is dangerous.

Can having a sex demoness for a friend help Faith finally win over Maxwell Harper or will Morgana lead Faith down a new and kinky path?

Faith’s imagination is quite interesting. If she wasn’t human, she’d certainly be a succubus. The discovery of a book leads to Faith summoning Morgana, a succubus who has some ideas of her own to share. Want and need turn into desire, but sometimes desire turns into something far more troubling. The ability to make dreams real, or, perhaps, a nightmare.

The series starts out with telling quite a lot about Faith from her perspective, and the entire work is told from that perspective as well. Faith has a rather deeply set self-image problem, and the things about that is, well before Morgana appears, it’s clear that Faith knows that all she really needs to do is look after herself better. Her friends are unique and interesting, the library she works in has some real possibilities as well. There’s just something I really liked about Faith, but at the same time there’s an almost constant internal monologue about her fantasies which gets a little worn before Morgana appears.

Morgana I can’t say is a stereotypical succubus, in truth it’s a little difficult to say what she really wants, if she is telling the truth or otherwise. What adds to this confusion is that Morgana’s view of the world is a little focused on the past, she not being on Earth for a very long time. There’s an oddity in her speech, her mannerisms and so on. At times she’s subservient to Faith’s will, at others she’s very much in control. There’s a bit of duality in her character which works well, but it might be at the cost of her becoming stereotypically evil at some point and I really hope that doesn’t happen.

I rather liked Morgana’s appearance, her means to transforming herself, the other powers she shows through the story. There’s a little bit of mind control as well, though that is very minor and fleeting. It isn’t out of place though and fits in with the scenes it appears in well. At one point Morgana shows Faith something which I understand about being intimate with her, but it was a little too… expected.

I’m hoping there’s something more to Morgana, that she’s actually going to be a friend to Faith and that the series won’t rush off towards pushing a twist ending at the last moment that makes everything that happened before have no weight.

The characters are very well written, their voices are quite distinct. A small scattering of spelling mistakes here and there, but nothing that takes away from the story as a whole. Some of the dialogue that Morgana speaks is a little bit odd, not just from what she knows, but more in that how the words flow seems wrong when spoken out loud.

The length allows a lot of story, character development, history and plot to be formed. The ending was a little bit expected, perhaps not the best way to end the first book. There’s a lot covered and it might have been good to split this work into two parts, expand on each and have the story not read as being as rushed as it feels like.

I’ll be looking for the next work in this series, I think there’s quite a lot of promise, certainly what might be happening to Faith is something to follow and if things turn as they might, I’m not sure if I will be disappointed or amused. That I think depends on whether Faith remains true to herself, or if Morgana’s game is more than it seems on the surface.

We shall see, I hope.