Succubi Image of the Week 436

A Review of My Best Friend is a Succubus: Book One: Summoning by Amanda Clover

A Review of Incubus: An Intense Novella by C. De Melo 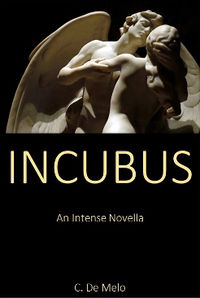 Not all stories written about the Succubi and Incubi tell of beings that, in some way, actually care about others. They can be aloof, cold, even spiteful. But being what they are, less so, who they are, can hide their true selves away.

That in itself can be a good story, but when the same can be said for the mere mortals that encounter them, the story can be quite a lot more complicated. Not everyone can show their true selves and survive, to be the same as they were.  Choices need to be made, regardless of all else, to one’s self be true.

Mia encounters two things she didn’t expect when she came to university. One was the crush she has on her professor, but the more troubling one is the nightly visits she has been having from… something… since she moved into her new apartment. A lesson told, a demand made, and Mia finds herself encountering an Incubus that has plans for her, whether she likes them or not.

This work is a slightly different approach on the theme of a woman encountering an Incubus in that there’s a distinct point to the story in how the Incubus, Shemhazau, is first seen to be and then, when the truth comes out about him, how different the attitudes are between mortals of the here and now and being of another age that cannot understand them.

Reflected in that is Mia’s own uncertainty which over time becomes somewhat of a barrier to her. While that is mainly to draw her story towards a conclusion which is at odds with Shemhazau’s plans, it doesn’t overcome the simple point that Mia has made her own choices and will continue to do so. She’s very strong within herself, once she makes up her mind, and there’s no point in the story where her character goes back upon itself.

While the work’s title speaks of intensity, that doesn’t really come out overall. There’s a very light piece of erotica, some moments of anger and strife, and a telling scene which makes complete sense all things considered and what Mia understood of her situation. The work’s story is really that of Mia’s relationships, her life, and an encounter which, when explained, becomes more than troubling. It becomes life changing.

This makes for a very well told story, but the ending leaves something to be desired. It reads very much like the ending to a television drama in which the things to come are mentioned, suggested, and left open-ended in something like a summary. With all of the care taken with all else, the ending that is shown doesn’t quite live up to the story itself and that shouldn’t have been.

The ending left me wanting in a lot of ways and considering how good the story is overall, that’s a real shame. I wasn’t looking for everything to be ended nicely, or completely, but in telling of what might be to come in a bit of a roundabout way, that felt like a way to get the story to an ending and not to the finish.