A Review of Lilith by Keith Vlasak

A Review of The Naughty Succubus Part 2: Mysterious Beautiful Strangers by Becca Lusk 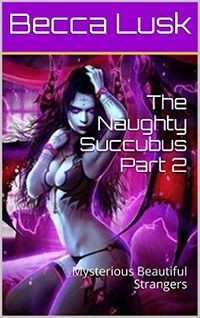 A review of the second work in The Naughty Succubus series by Becca Lusk today on the Tale. I reviewed the first work a short time ago and found that the mystery surrounding the characters interested me, but the author needed to edit things a bit more than they had done so. As an aside, the author sent me a revised copy of the first work in which much of the flaws were dealt with and it made for a better read overall. Following this I had high hopes for the second work in the series and what that might reveal.

Sometimes the hardest thing to do is listen. In doing so there are answers to many questions if one is willing to do so. But listening isn’t done in isolation, it needs to have two sides to the conversation. Being wrapped within one’s self, or, more tragically, unable to say the words needing to be said can make things harder than they have to be.

Trip Taylor had met the most gorgeous woman he had ever laid eyes on. And she had brought him to a new level of ecstasy that he had never even thought possible to exist. But if he went to sleep satisfied and happy last night, he awakens wary and curious in the morning. And this woman’s charms, great as they may be, aren’t enough to shake the fact that something is very wrong.

Who is Gabriel? Why does Trip keep having images pop into his head of things he has never experienced? What do they have to do with this beautiful stranger who seeks to only give him unnatural pleasure? And how is she affecting him physically? There must be some correlation why he feels so weak. Trip must find these answers, but in order to do so, he must first begin to understand how to ask the question!

Trip awakens to find that the events of the night before weren’t a dream, her name is Krys, and finds himself drawn deeper into the mystery that is her, and himself for that matter. Something seems very familiar, but he cannot understand why. Krys isn’t telling him everything and the answers aren’t coming all that quickly. But someone will be.

The work continues to build upon the mystery of the first work in the series and in doing so offers some vague points to think about which lead to all kinds of questions needing to be answered. While Krys is a little bit more defined as a character in this work, Trip remains, for the most part, an enigma which becomes more and more complex as the story unfolds.

One of the more interesting points for me was Krys’ reaction to something that Trick says and I think that offers the possibility that Krys isn’t a stereotypical succubus, not that it has been evident before, but the reaction seems to suggest something that I personally like to see in succubi.

There is a scattering of erotica in this work which I felt was better written and more “real” than the prior work’s scenes were. The passions are written well, there is some lovely heat, and as the scene closes, it doesn’t vanish into thin air to be forgotten. There was a point to understand which leads to more story and plot and that worked really well.

There are a scattering of minor spelling mistakes, but clearly the author has taken more time to edit their work. The dialogue is a little wooden still, a little odd sounding here and there, but again it isn’t to the extent of the previous work.

The work is short and it teases what seems to be a lot of plot threads to carry on as the series progresses. I think the two works might have been better served to be combined into one work and then allow the series to continue onwards. There’s not quite enough in each by themselves, but read together there’s some very good story here.

The work builds well, tells a little bit more about both of the main characters, but leaves quite a lot of mystery still only barely touched upon. These are good things by far, but the dialogue still needs some polishing, the narrative could be more involved. It is a real improvement over the prior work, but there’s still something missing in the telling.