Succubi Image of the Week 435

A Review of The Naughty Professor by Chase Jannock

A Review of Slumber Party Succubus by Sakura von Sternberg 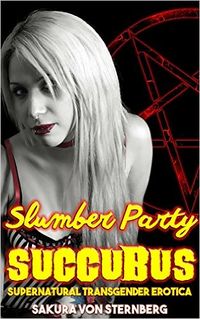 This is, of course, just my own personal view, but if the point of the story is, in some sense, the revealing of truth between the main characters, does there really need to be an evil succubus involved to make that happen in the first place? Somehow that doesn’t work well for me.

Alexa and Isabelle have an annual tradition that has continued since the early days of their friendship: an all-night slumber party filled with junk food, box wine, and bad horror movies. Even as adults, the two continue their slumber parties with pride… but now things have become a little more complicated. Alexa, a trans girl with a love for high fashion and eighties slasher movies, harbors a long-unrequited crush on Isabelle, a cis girl. She doesn’t want to say anything or act on those impulses. They’ve been friends for a long time. The last thing Alexa wants to do is wreck their friendship. But she’s having a hard time keeping this a secret.

Alexa and Isabella are brought to her as sacrificial lambs… but will leave dumbstruck, sexually fulfilled, and changed forever. They will experience pleasures beyond the limits of human imagination… and ecstasy that can only come to those who are already damned!

Alexa has a secret, but for that matter so does Isabelle. Friends for so long, Isabelle helping Alexa to make her way through her transition and her new life. They share a tradition, watching frightfully bad horror movies, but a dream remembered draws them both into the clutches of a succubus who has designs for both of them.

I found this work ebbed and flowed a lot for me. The beginning of the work, where Alexa and Isabelle’s story is told I enjoyed quite a lot. It told of their lives, what they had been through. It offered a glimpse into Alexa’s secret, her fears and more. All of this laid the most interesting groundwork for the story and in doing so I wondered how things were going to transpire.

But from the first moment of the pair falling into the clutches of Ardat-Lile, the succubus of the work, there are a lot of questions about how that happened exactly. There is mention made of a dream shared, but with so little detail as to be really of no use to understanding what is going on. Beyond that, when they have entered Ardat-Lile’s lair, the story seems to move from the character and their stories to Ardat-Lile quite simply having her way with both of them. There’s very little time spent when the sex begins to tell a story.

The erotica the follows I found to be somewhat violent, without purpose and, as well. didn’t add anything to the plot or work as a whole. It felt very much like a means to force the two main characters into submission, and the erotica kept hammering at that point over and over again.

It is a harsh comparison between the beginning of the story, which is loving and tells of a relationship that just needs a little push to move onwards into a story of succubus domination using pain. As such, the story really didn’t connect with me well once that corner was turned. There seemed to be no real purpose to Ardat-Lile’s actions, no meaning behind them, nothing that told of why things happened as they did.

At the conclusion of the story, there is a twist, but it is one that really isn’t a surprise considering how often Ardat-Lile tells Alexa she wants her. It is a bit shocking, what the ending gives, but it doesn’t really end the work on a satisfying note. From the depths of abuse and domination to where the story ends there’s a disconnect that bothered me.