A Review of Bright Shadows by Alana Church

A Review of To Seduce The Holy by Adriana Fullbright 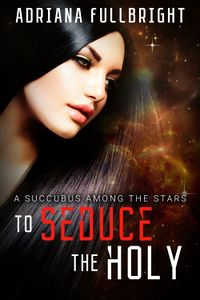 To Seduce The Holy by Adriana Fullbright

There are very few works about Succubi that place them in a science fiction universe. The hardest thing to do when it is attempted is to make the Succubus believable in the context in which she appears. She shouldn’t be a character that could not “fit” well into the setting, for one. But it is also where she comes from, what her goals and desires are, and, most of all, why does she appear in the story in the first place.

It is the year 3047 AD, and humanity has ascended to the stars. But there are much greater discoveries than interstellar travel that have been uncovered in the last thousand years. The paranormal and supernatural are real. Alternate dimensions and potent planar energies are known, if not well understood. Angels and demons exist, locked in an eternal struggle for the souls of sentient beings on the battlefield of the Material Plane.

Amidst the struggles of human kind, God, and the Devil, a lone demoness wanders the stars, without concern for the ebb and flow of the eternal conflict in which she drifts. Rainafel is an unbound succubus, no longer a Servitor of His Lascivious Will. She has been free of the shackles of Lucifer and his princes for more than two hundred years. But she remains a thrall to her own perverse and insatiable desires, and values nothing over the hunt for new flesh, the thrill of carnal energies intertwined. Plying her irresistible looks, her unequaled skill in seduction, and her command of the primal force of Eros, she searches among the hundreds of colonized star systems for the most powerful, the most exotic, the most beautiful specimens, and feeds on their energies with lustful abandon.

She now has her sights set upon the most stunningly handsome man she has seen in centuries. Even more deliciously, he is a Priest-Captain of The New Catholic Church of Man’s Interstellar Holy Ascension. There is nothing sweeter than pulling a holy man from his faith. She will break through his iron will and revel in his sexual energies. She has never seduced a priest who wasn’t an absolute pervert in breaking their vows, and she cannot wait to taste and feel all the filthy things Priest-Captain Manuel Ignacio Escalante will do when she finally tears away his armor of faith.

Rainafel is a freed succubus, one that is able to make her own choices, her own path through the universe. But she is still a succubus, one that craves challenges and she has found one. Humanity has crossed the stars, taking its faith with it. She encounters one of faith who, to her surprise and delight, resists her. But she is patient and her need consumes her.

Rainafel is one of those Succubi who is not stereotypical at all. She has a past, a well woven and told one, she has needs, which constantly press on her. But she is also not a fool, being wise and long-lived to know what she can, and cannot do. Being that she is freed, for lack of a better term, that also means that she need not take souls to survive. She’s more than happy to entwine herself in a challenge and delight in what she can bring them to do when the shackles of their existence are removed for a time.

That is not to say she hasn’t done the occasionally “evil” thing of course, but it is more of the needs within her, to find those that resist her, and, over time, to draw them into finally falling to her. Encountering Manuel, Rainafel cannot turn away from him for he has rejected her powers over and over again. This becomes the core of the story in that Rainafel thinks about all of her attempts, but as well that allows for her story, her history to be told. The tapestry of that past is a rich one, well developed and it added much to what otherwise could have been a hot flash and nothing more. The telling of Rainafel’s travels, her encounters tells a lot about her and in doing so he becomes a fascinating character to drive the story onwards.

Following her musings and watching Manuel from afar, the work turns towards a very hot and passionate Succubus encounter which has delightfully told mind control aspects to it, but as well, the telling of Rainafel sating her needs and how in doing so she controls Manuel is a well told change in both of their exterior personalities and allows their internal needs to come to the fore. The erotica doesn’t feel out of place, it does have a purpose, a focus and by the end of the moment, there’s a certain satisfaction in that.

The work is set in a science-fiction universe and tone, but it doesn’t override the core story, It does colour things to a point, giving a voice to what exists around Rainafel herself. But really the work focuses on the two main characters and in doing so the universe itself it pushed to the background for most of the story, only really coming into focus at the beginning and in the conclusion after the climax has passed.

The work ends on a point which tells of a story to come, something new for Rainafel to focus upon. It also tells something about what Rainafel’s thoughts about mortality and existence are and I found that a refreshing change. There’s a clear direction to the ending and the story to come, at least that is hinted at, seems to be very unique and where that would take Rainafel I think would be amazing.

Well written, the characters are strong and have excellent voices, especially Rainafel herself. A unique setting and story that I think offers quite a lot and in doing so didn’t leave me wanting for much. I do feel that with all that was told about Rainafel herself and her past, that how she got to where she is would be a story in itself, especially to tell more about how she was freed, which was almost casually mentioned here.

There are quite a number of questions not answered, one of them being if there are others like her in the universe she exists in and if they are like her or not. I think that would be interesting to explore as well. The more pressing questions fall around the Church in this universe, which is a force in the background, but one that Rainafel herself seems to be quite concerned about. Perhaps telling something of that, what has happened, would be good as well.

As the start to a series, which I hope the author does at some point continue, I think it works really well. A strong beginning and one that I did quite enjoy.

I hope to see more of Rainafel, her world, her future and her past. There is a lot of possibilities here and I would like to see them unfold.