A Review of To Seduce The Holy by Adriana Fullbright

Perhaps a bit misnamed as a costume I think

A Review of Bright Shadows by Alana Church 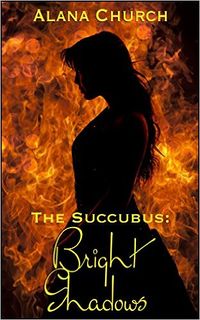 A review today of the fourth work in The Succubus series by Alana Church. My first review is here, the second is here and my most recent review of the third work in the series can be found here on the Tale. The series has begun strongly and in each part of the series so far I’ve found things that interest me, make me ponder and wonder… In this work… I wonder about… tails. Quite a lot actually.

Sometimes the biggest surprise isn’t the one others expect, it’s the one that you didn’t know about in the first place. Whether that is by hook or by crook, the result is the same. A moment when you aren’t sure about what just happened, and what it all means.

Rachel Wainwright is a mortal woman who has become the host of Althea, an immortal succubus, a being of desire, passion, and sex. Now aware of the woman who shares her mind, Rachel searches for Althea’s body, seeking to restore her to her physical form.

But evil is stirring. A dark force grows aware that Althea is vulnerable. Unaware of the danger, Rachel and her family embark on a journey of sexual exploration. Sarah, Rachel’s teenage daughter, finds herself torn between opposing desires. Will it be Jeremy, Rachel’s sexy intern, who wins her heart? Or will she give in to another, more primal need? And Alex and Maria find their hearts tested, too, as a trip to the hospital to visit Althea’s body turns hot.

Because when you bask in the light of a succubus, you will find she casts…Bright Shadows.

Althea and Rachel have discovered some things about one another they didn’t expect. Much of that has to do with Althea’s succubus nature and the most interesting things that is it doing to Rachel the longer Althea remains as her guest. Rachel is seeing the world through different eyes, catching things that are new and unexpected. Althea finds the family she is now part of means the world to her and more. More lives become entwined, the path is not a simple one and one small turn makes what has been passionate turn so very serious and worrisome.

The core of this part of the series focuses mainly upon Sarah, who’s story has been brewing in the background for the most part so far. The frustration, the need, the wants that have been eating away at her while everyone else in her family has been growing in their sexuality, comes to a boil. The part of this work that I liked was the time spent with her parents, Rachel and Josh, the three working out what Sarah’s needs are, how to express them, and, eventually, this to lead to an involved encounter that I thought was very satisfying. It isn’t a throw away scene where Sarah’s issues are dealt with in a rush, the dialogue matter, the emotional context of the scene is wonderful and when the moment passes, there’s something more within Sarah than there was before.

Along with this comes a moment when Rachel speaks quite frankly with Alex and Maria, in a way that I thought resolved another simmering conflict in the right way. There’s a hierarchy starting to appear, and everyone needs to know where they stand. Rachel makes this clear, but in the same way, Maria makes that clear to Alex as well. This isn’t anything half-hearted, it’s well told, makes sense, and considering the focus, I think it’s very real.

Eventually Rachel finds Althea’s true body and that scene, how it unfolds, the effect that Rachel has on others to make certain things happen, was quite amusing but at the same time it gave voice to Rachel having a little bit of Althea’s succubus powers. Which brings me to the moment in the work that I have been both pondering and smiling over.

Rachel… has a tail. Her first experience with it was wonderful, mainly for the erogenous zone aspect of it for one, but there’s something else. It seems that succubi in this series can hide their tails inside of their bodies… and I just can’t wrap my head, or tail, around how that works exactly. I realize this is artistic license and all, but I keep trying to work it out in my mind. Yes, I am rather obsessed with succubi tails as a matter of fact. It still confuses me and bother me, but just very slightly.

Along with the appearance of Rachel’s tail, there’s a amazingly funny moment when Rachel reveals her tail to Josh. I honestly couldn’t stop laughing in the moment as I read the scene, but more so, how Josh managed to wrap his mind around the fact that his wife has a succubus within her, but also, his first actual encounter with Althea in Rachel’s body was telling. I found myself wondering when, or if, Althea might just ‘borrow the keys’ and have some fun with Josh sometime.

Along with the discoveries comes an encounter with someone that is going to be a real problem for Rachel and Althea. They aren’t stereotypically evil, at least in the short time they appeared and I believe the author can keep them from being so. It will be interesting to learn about them, how they contrast against Althea, and what they want  as well.

Overall, the work told a very good story, there was only one part that I found odd in the storytelling, that of Rachel, Alex and Maria finding Althea’s body and in the midst of helping her to heal being discovered. I think I know what’s going on, and it makes some sense, but what that means for the one that is captivated by Althea isn’t clear and will take some time to unfold.

I did feel like there was a lot going on in this work, possibly too many things happening alongside of each other. While part of that needed to be, the characters had to move on, the story needed to get to the next stage and so on, I think a little rest in the rush along the way might have been a good thing. Nonetheless, the story didn’t let the characters down, nor did it go off the rails. Lots of questions to wonder about still, the future is uncertain and that leads to more story to tell.

The series continues to tell a story that I find myself deeply invested in. Not everything has been told about Althea, about the succubi. Nor has the story been told about those that are the real evil to be seen. The tension is mounting, lives are being shaped, changed, and taken to flights never before thought of or experienced.

This then is what makes this series what it is. The expression of making a choice and the consequences of doing so. Where things go from here will be telling, in many ways, and at the same time there’s a certainty. I can hardly wait for what comes next in the next work, Sacred Sins, and what Rachel, her family, and Althea, encounter.