A Review of Submitting to the Alpha Demon by Demona Lust 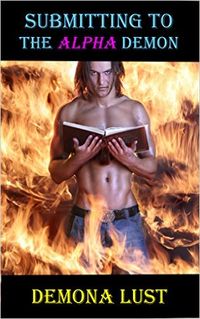 Submitting to the Alpha Demon by Demona Lust

There are some works which I have a difficult time reading. The problem mainly comes to how the story is told, the disconnect I have with the characters and, more often than not, erotica that just has no heat in it to speak of.

Dialog is a difficult thing to write, because when it is written in the wrong way, the words are stumbled over and it hurts the story as a whole. When the characters themselves are stumbling as well, then it is very hard to keep things interesting.

A Demon, an Angel and a Priest walk into a church… Wilson, a man of the cloth, must confront Demos, a demon from the underworld and Jeremiah, a soon-to-be fallen angel in this battle of good versus evil. Both want his soul but only one can have it. Will the priest give in to the Demon’s power and allow his carnal desires to consume him. Or will the Angel be able to save his soul from the devil?

Wilson finds himself confronted by a demon, more of an Incubus, that wants him, and an angel who also wants him. A crisis of faith moves towards something else which tells a story of them all.

The idea of this work, the theme suggested, I thought had quite a lot of promise to it, but there were many difficulties for the work to overcome that I don’t think it managed to deal with. The first of these is the internal monologue of Wilson, the main character. It is uneven, reads oddly, and there are a lot of disconnects, odd sentence structure and overall in being so that makes it quite difficult to read.

The dialog as well has the same difficulties. It reads strangely, having no real inflection, purpose or tone. It reads too stiff and formal, there’s no real emotion behind the words most of the time and being so when the erotica comes into play, and that continues throughout, it’s difficult to find any heat in the moment.

The erotica itself leaves a lot to be desires, there’s no real passion or heat in it, reading much like an adult film in many ways and I think the same can be said for the story as a whole. It isn’t so much erotica as it is an adult film which means the story is by rote and then the erotica seems to follow the same path. There’s heart missing in the story and that needed to be there.

The beginning of the work is abrupt and confused, as is the ending, and that doesn’t help as well. The work needs a good deal of editing to bring some life to all of the characters, to give them each a clear voice. There needs to be a connection, at the moment, there isn’t one to speak of.

The work needs a serious rewrite to bring some life into the dialog and the characters. There’s something missing throughout that leaves things flat and uninteresting right through the erotica as much as the story itself. The concept is intriguing, but the telling of the story doesn’t measure up to what the promise could have been.