A Review of Submitting to the Alpha Demon by Demona Lust

This costume should be tossed into Hellfire… 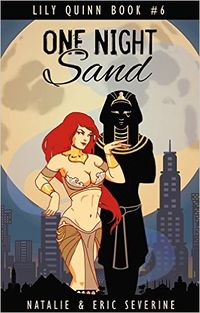 One Night Sand by Natalie Severine and Eric Severine

The seventh review of the ongoing series called Lily Quinn written by Natalie and Eric Severine this time on the Tale. You can find my first review here, the second here, the third here, the fourth here, and the fifth review ere. The review of the prior work to this one can be found here on the Tale as well.

One of the things that I have been going on about for some time is that Lily is more than her sexuality. She’s smart, she’s thoughtful, and woe to anyone that doubts how intelligent she is. But overall that part of her has been set to the side for her more physical reactions to problems. In this work however, Lily has to think and doing so, this work stands out amongst all of the works in the series so far for me.

There are many riddles in Egypt, the Sphinx isn’t the one being that has them. But facing the riddle is only part of the problem as is the answer. The real riddle is what you do when you have the answer and what does it mean?

For eight years, I’ve hunted any monster that the College is willing to pay me for. They’ve pitted me against vampires, werewolves, fairy thieves, and even had me arrest a pair of their own rogue wizards. After all of that, it seems that I’ve finally earned a bit of trust.

The College has a problem. A mummy named Ptah has managed to secure a stranglehold on real quicksilver, a rare alchemical reagent. I don’t do magic, but that’s exactly why they called me – wizards aren’t welcome in Egypt.

So the High Magus is sending me in. First I need to get permission from the djinni to enter their lands and then try to negotiate with an immortal alchemist on behalf of the entire Merlinic order for a resource no longer obtainable anywhere else on Earth.

But I have some ideas on how to get them on my side. I can be very persuasive…

It’s taken a very long time for Lily to gain some measure of respect from the College and in the moment that she has that respect it seems they need something from her. A mission they need Lily for leads to a promise from one and a threat from another. Given that Lily has no idea what she is getting into exactly, the surprises come quickly. At least Lily will see to it that someone does before she extracts what she’s come for.

The most interesting thing about this work comes from the fact that Lily is forced to use her mind and think her way out of situations rather than fighting her way out. Throughout the series, it’s been shown that Lily, when she’s all “sexed up” is a match for just about anything and anyone. But what doesn’t come out so well has been just how smart Lily is. So many around her cannot see past her being a succubus, or thinking about how great it would be to have sex with her. Occasionally the series has turned, if slightly so, towards that theme, but tended to fall back upon Lily fighting her way out or telling of another of Lily’s erotic moments.

While that has established Lily’s personality, there’s also the aspect of her that cares about Max, her best friend, the part of her that needs, almost desperately so, to learn about her real past. There’s so much about Lily that is more than her sexuality, and the most telling part of that is her sense of right and wrong. This theme takes of a lot of this work in the series and it opened a lot of plots and revelations about Lily herself that have been in the shadows before.

The erotica isn’t forgotten, not by any means, but overall there’s a better balance between the erotica and the story telling in this work. It’s almost split evenly and, at least for me, that made a tremendous difference. The story leads into the erotica and vice versa, meaning that there are reasons for what Lily does and why she entwines herself with two characters in this work.

Of the two, the first encounter with a Djinn, was the hotter of the pair by far. But more than the sex, the heat, there’s a good deal of information revealed about the succubi in this universe, who controls them. A single line that offers the possibility of Lily having to deal with a serious problem at some point. At the same time, a promise given offers some really interesting possibilities, and I find myself wondering about that more than anything else in this work.

The second character Lily encounters, a mummy, was quite surprising in a lot of ways, but at the same time was immensely unlikable, which was the point. How Lily deals with them, the aftermath of doing so, was inspired and it showed just how smart Lily really is, but also, just how compassionate she is. The two parts of Lily combined are far more than just her sexuality and it was amazing to see how her mind worked, the answers she found and the riddle she solved.

Beyond the main plot, the opening chapter revealed a lot more about the College, those in charge of it, and more importantly, there’s a shifting of how others see Lily. Whether that is for good or bad is hard to say from what was revealed however. Nonetheless, Lily having a little more understanding, a little more knowledge is a very good thing and it brings up the question of what happens if, possibly, Lily discovers she can wield magic. Where that takes things would be something special.

Max, Lily’s best friend appears for a time at the beginning of the work and there’s been something added to their relationship that I think is, in a way, a bit of a red herring. It might lead to something, but somehow I still feel like Lily and Max are meant to be together and I hope that aspect of their relationship grows soon. The pages are turning, time is passing, and developing their private lives more would be good.

The most enjoyable part of the series so far in so many ways. The real Lily, the one that everyone overlooks, has her day. The series overall plot might not have moved much, but for seeing Lily think instead of act was well worth the pause in the overall series here.

Finally we see Lily using her mind as much as her body in order to figure out an answer to the puzzle she faces. The lack of fighting makes this work, at least so far, my favourite of the series because Lily does not fully rely on her sexuality as a succubus. She’s far more than a sexy body that everyone wants, she’s a soul that is something more.

This more than anything else needs to come out more in the series and I hope it does. There’s a huge mystery surrounding Lily and it seems she’s getting the pieces together to figure it all out. When she does so I wonder what the fallout will be and what it all means to Lily.

That, after all, is the riddle isn’t it?