A Review of Case of the Missing Succubus by Gerald Costlow

A Review of The Naughty Succubus: Part 1: The First Meeting by Becca Lusk 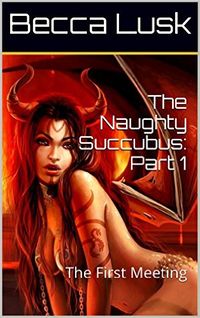 The Naughty Succubus: Part 1: The First Meeting by Becca Lusk

A review of a newly begun series by Becca Lusk called The Naughty Succubus this time on the Tale. I’ve often said that there are some story ideas that have something about them that I find interesting, but then the editing, or the dialogue, or sometimes the erotica takes away a lot of that.

The question of who someone really is cannot be explained by what they look like on the outside. It’s more important to know their souls and who other than a succubus would know them best of all? But when the reveal comes, what does it mean and where does it take the one who’s life isn’t really their own?

Trip Taylor was a ravishingly handsome young man. The only problem – he was a bit of a loner and had time talking to women. When Trip gets depressed to the point of being completely morose, he meets a mysterious stranger. She captivates him, and he realizes that he loses all grip on reality when he is with her. But who is she? What’s her name? He doesn’t know, she only tells him what to call her. She seems to know him from before, but where did he meet her? Will she ravish him? Will anything be left of him after she is done?

Trip goes out for a night with his friends and then, before long, gives up to go home. Along the way, an encounter with a seductress turns into something unexpected, or it is really? Reality blurs sometimes and in the midst of being seduced, the seducer uncovers the truth that Trip never knew before.

Overall the work tells of the main character’s life, his lack of luck at finding love and then encountering a succubus named Krys who has her way with him and in doing so quite a lot of mystery is created about Trip, the main character, and Krys, who seems to know him intimately.

There isn’t a lot told about Krys in the story really other than her appearance, both in their first encounter and then when she reveals her true form. There’s nothing about her past, what she wants, nor how she comes to know of Trip. It is mainly setting up the series in asking the question of Krys and who Trip really is.

This is a little bit of a surprise as by the end of the work, everything we seem to know about Trip is brought into question. The ending suggests that Krys knows something more, there’s a reason why she’s appeared to Trip now and the last lines of the work end in a cliff hanger that seems to suggest that story, when it is told, will be a complicated thing by far.

However, there are a few moments in the erotica which have things occur that were slightly cringe worthy, most in how things happened, and how really odd and, for the most part, impossible, some of the moments were. That’s not to say there wasn’t heat, there was, but reading through those moments brought me to a sudden stop as I tried to imagine what was happening and I just couldn’t suspend reality long enough to make that work for me.

The work needs more editing, mainly to correct several points at which odd words creep into the story. For example: “he saw her beautiful feel wearing high heel shoes.” This happens a number of times and it creates a bit of a stumble in the story. As well, some of the dialogue reads odd, stiff, almost robotic in a way. There’s a lack of emotional context sometimes that needs to be there and isn’t. As well, some of the narrative reads oddly, moving from one tense to another, having some clunky sentence structure as well.

There is a story here, it’s interesting and seeing what comes next interests me. I just would have liked a little more editing to make the story come out better, to leave some of the unimportant details out and build on the ones that mattered.

The work needs another editing pass for the spelling mistakes, the somewhat wooden dialogue as well. Beyond that, some of the erotica was a bit too far over the top, even for a succubus to manage and the story lost me for a while in the midst of that. Still there is a mystery, actually several of them, to be told and that’s what interests me the most. Hopefully the next work in the series will expand on that and leave some of the questionable erotica to the side for the moment.