So that’s a Summoner’s War Succubus

A Review of The Naughty Succubus: Part 1: The First Meeting by Becca Lusk

A Review of Case of the Missing Succubus by Gerald Costlow 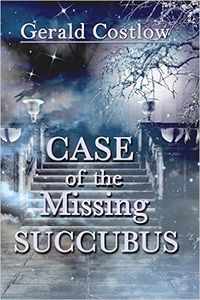 Case of the Missing Succubus by Gerald Costlow

I do enjoy works in which the joy the author has in writing comes out clearly in the characters, the story, and the world they are creating. The thing kept in mind is making the characters tell the story, not the story tell the characters. By allowing them to “be” the story that places a certain set of things that must happen into play.

The main character needs to have something that keeps you in the story, there must be a mystery, an event, something of meaning to follow through on. But most of all, in the case of a work that is the foundation of a series, you must tell of the universe and its rules, but also of the past and what that means. It isn’t a simple thing to do, but when it is done well, it is an amazing read.

Rose, the Witch of the Woods and High Priestess, is called upon by the Dean of White College to solve a murder mystery, find a missing girl, and get things under control before someone else winds up dead.

Her assistant, a shape-shifting coyote named Keyotie, relishes his reputation as the Trickster and greatly enjoys the company of females. But he also possesses a sharp nose and a certain talent for solving puzzles.

When they discover the missing girl is not human and other things are not exactly as they appear, their quest gets even more complicated.

Rose returns to the place where her life truly began. A place where magic is real, learned and held for each student. A pair of Succubi seem to have murdered, one of them is missing and the other tells nothing. But the real mystery is the world outside of the gates and the humans that they see everyday. Not all things are as they seem and not all of the problems to be solved are the ones made by magic alone.

Rose is a legend of her time, and a legend of the College she attended. Called by her teachers in need, she finds herself pulled in many directions by them, but also by the Goddess she represents. Nonetheless, Rose is not helpless. She is smart, she is powerful and she has a duty. It’s good to see a character like her, who doesn’t need help, is more than capable and can look after herself. But it is also good to see how she and Keyotie interact through the work.

Their relationship is complex, their pasts are murky and intertwined as well. But there is a respect, an understanding, and along the way the tension isn’t a sexual one, which so many authors would move towards, but rather two wills and personalities coming at a problem from their own perspectives and trying to solve it.

That problem is the Succubi twins named Holly and Molly, who I just adored. They aren’t stereotypical, they are not evil and I especially liked that they are the creation of the Goddess, for a purpose meant to battle evil in her world. Seeing how they are seen by others, in how they are misunderstood, held, and, sadly, brought to harm and threat, is somewhat sad to see. But how they deal with it, what they do to prove they are worthy of being in the College, that they deserved to be there, how they manage it. That story is every bit as important and powerful as that of Rose herself.

This is not a work of erotica, nor would any sort of erotica really have made any sense. It is a mystery at its core and unraveling that is an amazing ride that Rose, and the reader, are taken through. The writing is solid, the world has rules and history, and the characters from Rose to everyone else has a voice, a past, and a need that comes out well as the story is told.

As much as I adored this work, the ending was, I think, a bit rushed in how things came to a close. Not so much the explanation but the mulling over of the events by Keyotie at the end. They leave some interesting questions that I would have liked to have seen explored, not to mention to know more about both of the twins and not just the one that was seen through most of the story. Nonetheless, a wonderful work and well enjoyed.

Well written, amazing characters, a view of Succubi that I think works well, and means something. The truth found is more than what is found and the future might be just as murky for Rose and Keyotie both. But that is what makes this so interesting and captivating…