A Review of Incubus Seduction by Lyra Valentine

So that’s a Summoner’s War Succubus

A Review of Recruited by the Sexy Witches by Sally Fornia 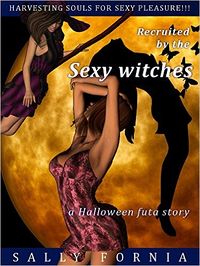 Recruited by the Sexy Witches by Sally Fornia

I will be reviewing the third work in the Cult of the Futa Goddess series today on the Tale. I will say up front that I didn’t read the preceding works in the series, but that isn’t necessary to get an idea of what is going on in this story and who the characters are.

It takes some effort to being characters into a story and in doing so, one of the things that needs to be done is to describe them, tell who they are, and, if possible, what makes things different about them. Leaving out some of that tends to take a lot away from the rest of the story.

Right after her hot, steamy initiation in the Order of the Futa goddess, who asserts her power through sexual pleasure, Hellen, the recently recruited witch, needs to become a recruiter herself. The candidate is Kaylee, the young new intern at the firm where she works, who is only nineteen years old!

Hellen and her witch friends, Lameia and Fand, who can switch their genders at will for maximum effectiveness, will approach Kaylee and introduce her to the coven –by way of introducing all kinds of things inside her!

But what they don’t know is that Kaylee is not what appears at first sight. Trying to get her join the coven is a dangerous thing, and they will realize that playing with sex as a force of darkness may have unexpected results!

Three witches got to a bar and find Kaylee there with her friends. A bit of magic, a statement of need, and then they draw Kaylee into their coven. But the thing is, when they find out that Kaylee is a Succubus, who will succumb first?

Being that this story falls after two previous works in the series, there are somethings that need to be explained, and are, which helped me to get into the story, understand why things were happening and what the point of the story was. However, while that part helped, the actual focus on story was somewhat pushed to the side for the sake of the erotica that comes otherwise.

Kaylee is the succubus of the work, but she isn’t really described in a lot of detail as to what she looks like as a succubus, save for her eyes and fingernails. Beyond that, nothing is said as to how, if any, she changed otherwise. Kaylee also mentions that she “doesn’t know how to control it”, meaning her succubus powers and that’s all well and good, but at the same point Kaylee seems to have more control over the situation than the witches do. If not some “action” with a broomstick things might have been more interesting than they turn out to be.

The dialog is a little strange at times, almost silly on occasion. Some of the transformations mentioned would have been nice to see as more than a sentence, they peeked my interest even though the story really didn’t tell much of them. The erotica is isn’t too hot really once Kaylee’s true self appears and when that happens, the story rushes towards a conclusion in a mad rush.

I think there is a lot of room in the work to add to the story, to layer on, perhaps, more “danger” from Kaylee, a longer “battle” and, if possible, to tell more about Kaylee herself, what she looks like as a Succubus and what she can really do. As things are now, it reads too thin, needing more and should be for all of the openings in the work to expand on the story and characters.

Kaylee is a succubus, and that is what she is. But the story doesn’t really expand on that for the sake of getting to the erotica. A bit more time spent on telling Kaylee’s story among all else that happened I think would have helped things a lot.