A Trailer for the short film Succubus

A Review of Wake Up by Eugene Ahn

A Review of World’s Shyest Succubus 4: Sisterhood by Taylor Knobb 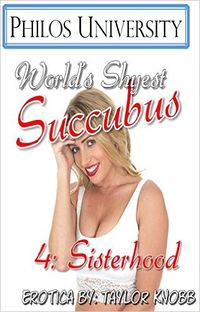 A review of the fourth work in the World’s Shyest Succubus series by Taylor Knobb. You can find my first review of the series here, the second review can be found here, and the third is here on the Tale.

Becoming a succubus isn’t the entire story, it’s just part of it. The larger story is the question of learning not what you can do, but whether or not you have the means to control yourself. Things can go wrong, they can go right as well. But most of all, the truth of the story is that of what you hold most in your soul.

Adina is starting to adjust to being a succubus, though the new wings and outrageous measurements are still difficult to deal with. Even worse is the succubus hunger that drives her into the arms of random lovers. For the first time, though, there’s a glimmer of hope: Adina isn’t the only succubus who lives in town! Adina’s new friend seems friendly enough, though there is the slightly worrying issue of the bat wings, the red skin, and the horns at her temples…surely a sister wouldn’t lead Adina astray?

Adina finds that her powers as a succubus have one singular purpose and she’s not sure that she likes that very much. Finding a measure of control she tries to figure out her life and in that moment Chastity appears. Having a succubus sister helps, especially when Adina’s hunger is growing again. A lesson taught, some things learned and then Adina discovers that being a succubus means there are moments of joy and wonder as well.

In this work, Adina comes to learn some of her powers and abilities, which I thought made a lot of sense, but more so, she begins to move from being afraid, lost, and unable to cope towards entering herself and learning. It’s an important change and really it needed to be so as Adina continually losing control and then hating herself was starting to become a thin plot point.

I love her wings, I think her transformation ability fits well, there’s a certain rightness in what seems to be her real form. I’m not so sure that Adina going from a D-cup to an H-cup really works as a whole. While this makes sense in the context of the story, being that Adina has some ability to transform herself, her clothing, her wings and so on, I dearly would have liked to see her be more than her cleavage. For much of this part of the series, there is a lot of focus, from Adina and others, on that point which takes away from everything else.

There are two scenes of erotica in the work, one with Adina in a shower, the other at the end of the work which means a lot more and actually answers a lot of questions about her. But before getting to the latter part of the story, and Adina’s first real moment of joy, she meets Chastity.

Chasity appears to be what one expects a succubus to be, but she’s far more an interesting character than that. There’s a wonderful emotional connection and care about her that Adina finds attractive and so did I. But that leads to the singular problem in this work.

There are many points in which things are skimmed over. There’s a lot of detail, for example, that could have been focused on when Adina was learning something about being a succubus from Chastity, but it just is glossed over with a single sentence and that didn’t sit right. There was an opportunity to tell more of a story, to enter the world of the succubi in this universe and this just doesn’t happen.

The time spent at the beginning with Adina’s roommate, the discovery of some of Adina’s powers, the leading up to Chastity’s appearance told a lot about what Adina is going through, but again it’s glossed over at some points. Considering how much else is described and told, I wish the author had put as much into telling the story more than it was.

The promise in this series to this point has been in Adina herself. How she has coped with what’s happened and trying to understand. But there’s been nothing to help her along, she’s at the mercy of her own needs and hungers. While she succeeds at some points, a bit of time spent with Chastity telling her what’s going on before Adina’s hunger gets the better of her needed to be, but it wasn’t.

The work ends on a hopeful note, one that melds really nicely into Adina’s personality, her needs and desires. More so, how she is described simply works with who she is most of all. The ending leaves things in a good place with some hope for Adina’s future and that will be interesting to see happen.

Possibly the best of the series so far, from Adina’s character developing to the revelation of Chastity and what succubi are, at least somewhat, in this universe. Perhaps Adina’s curves are well over the top, but then all things considered, that seems to be how things were meant to be. And that’s the thing about this series so far. Everything seems to make sense and everything matters. Adina remains true to herself, it’s just that she has started to accept herself. Something she’s not been able to before.

The series will, it appears, conclude with the next work and I’m of two minds about that. I don’t expect the author will complete the work as a whole, there’s just so many questions left and there won’t be enough time to close things I think. I hope I’m wrong, I want more for Adina and I hope that comes. A good ending would be nice and I hope it is. The next work is called Adjustment, and I hope that the story continues in the way it has so far.