A Review of Spring Break Ecstasy by Maxwell Avoi

Something More By TeraS

A Review of My Student Summoned an Incubus! by Thorn and Nin 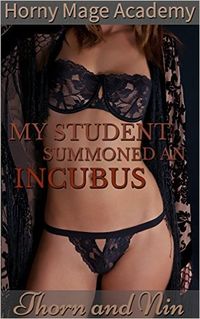 My Student Summoned an Incubus! by Thorn and Nin

A review of a follow on work in the Horny Mage Academy series today on the Tale from a work that I reviewed previously.  I haven’t read the rest of the series as there are no other appearances of succubi or incubi in the series save for these two works, but overall I did like both of these works. You can find my review of the prior work to this one in the series here on the Tale. At the time I suggested that more character development, more story, more meaning would have made there story something more than it was. In this follow on work that does seem to have happened.

There comes a moment when what you are capable of runs headlong into something that you never expected to face. In that moment you can run, hide, give up, or you can keep on fighting. It is the last choice that is the hardest to make, but it also can define who you are better than anything else.

When a disturbance is reported in the Mage Academy waterways, Miya and her professor Aldwin are called to investigate. It’s dark in the tunnels beneath the school, but Miya knows her beloved professor Aldwin will make sure she’s safe. That is until a chance encounter with the enemy leaves Maya isolated and lost.

She’s not alone though.

There are secrets hiding deep below the earth. Secrets that threaten to lead Miya into the clutches of the forces of darkness.

Trapped in the sprawling maze of waterways, Miya has no choice but to trust her professor’s Incubus. Incubi are demons of lust however, and they prey on innocent women, feasting on their energy. Miya isn’t even sure she can control him alone.

Will she escape with her life or be captured forever by the darkness?

Miya finds herself on a mission with her professor to solve a mystery underneath their school. In doing so, she finds there are some things that do not react well to being found. Losing her professor, Miya has little choice but to use his incubus and try to help. Eventually that search takes her to three things. One, that an incubus is a very hard thing. Two, being alone isn’t as frightening as not believing in yourself. But most importantly, sometimes you need to do the impossible no matter the cost.

The singular thing about this work more than anything else is the development of Miya’s character. The time spent in learning about her hopes, fears and more, really solidifies her and makes her by far a well fleshed out character. Really she is the single character that seems to have a soul in the series, the balance being somewhat far behind Miya in their story development and otherwise.

The erotica in this work revolves around Miya and the incubus from the prior work, though Miya’s own succubus does appear, if fleetingly and not in any sort of erotic context. Unlike the prior work, Miya is less overcooked by the incubus, there is a real struggle for her, a reason to resist and that seemed to what was missing in the prior work. In this story, Miya needs to survive, to win her own battles and then somehow succeed. It’s the telling of that story, even when it is mixed up with the erotica, which actually makes the erotica more powerful.

The incubus however never speaks a single word and I honestly wish that he did. It’s one thing in that he wants to do all of the nasty things Miya wants, but there are moments otherwise when Miya could have used a word of encouragement or something. It felt like something was missing. Expressions aside, and some of those were telling, something is going on between them beyond their sexual encounters and that’s a story that needs to be explored.

This work is more than twice the length of the prior one and it really makes a difference overall. There’s time spent in telling the story, the characters interacting, the moments of grief, choice, and, sometimes, sheer determination. There’s a real emotional connection to Miya and what happens around her which I felt mattered. Miya grew in this work, forced or otherwise, she’s not really the same person from the start of the story to the end and it really is encouraging.

Some new characters appear in this work, and they add a flair to things that Miya’s professor simply could not. He’s somewhat of a “cold fish” in a lot of ways, and having another character about Miya’s age helps a lot as does a familiar that can talk. There’s more story told as a result and it makes for a better read.

The work tells of an adventure, a coming of age, an encounter that leads to a choice. In all of that along the way, Miya becomes so much more than she was in the first work she appeared in. Where she goes from here is an interesting question by itself. Personally I would love to see a story in which Miya summons her own incubus and succubus and while that would lead, as the series does, to the erotica, perhaps it would also lead to Miya maturing, becoming all she seems to be capable of.

Well written, the character development was unexpected and made this work so much more than I was expected from the first. The incubus erotica had a good deal of heat mixed with some lovely aspects of mind control. The promise this work gives about Miya has made the difference to me and I am looking forwards to seeing what comes next.

A much better story than the prior one in many ways. While the erotica is as hot as the prior work, it doesn’t take up much of the story and that, overall, makes for a far better read. There’s more character development, more telling of why things are as they are. There’s time spent in making the characters grow and become more than simply the focus of some sexual encounters. This, more than anything else, was what I hoped for in the first work and this one delivered on that.

Miya has found herself, here’s hoping that the other characters can do the same.