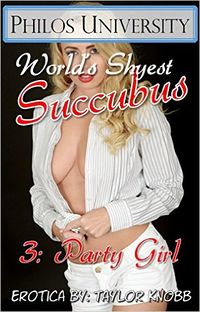 A review of the third work in the World’s Shyest Succubus series by Taylor Knobb. You can find my first review of the series here and my second review can be found here as well on the Tale.

The thing about transformations is that while the body changes, the soul within cannot simply be allowed to be thrown away. The emotional connection with a character matters and not being true to the character in the face of whatever need, craving, or sexual act does a disservice to not just the character, but the reader that invests themselves in the story.

Being transformed into a succubus does not mean losing your conscious, yourself and your soul. The thing is, a succubus with so soul is empty and no amount of sex or wanton desire can replace the losing of one’s own soul. In the midst of ecstasy, doing the right thing matters. Always.

Adina now knows that she’s somehow been changed, turned into a succubus, and that there’s nothing that anyone can do about it for at least a few days. While she waits, though, the new hunger grows within her, and she needs to figure out what to do about that; she doesn’t want a repeat of her first day, when she was unable to stop herself from diving into bed with her roommate, Kelly. Fortunately, there’s a party on campus. Now that she has some clothing that fits her altered, outrageously curvy body, maybe she can find a willing partner at a party like that…

Adina finds that being a succubus is a complicated thing. If it isn’t her body changing, than it’s the looks she gets that make her feel more and more uncomfortable. If that isn’t enough then the need, the hunger that has been on her mind pushes her to do something she’s never done before. She’s going to a party on campus. That’s going to be something she’ll never forget and along the way, it will be something that won’t ever be forgotten either by anyone else. If they survive that is.

The single most important thing I wanted to see was Adina being herself in spite of the needs of being a succubus and thankfully the author manages to keep much of Adina’s core personality in control of things, or at least as an overriding force as the need within her to feed upon others pushes her to take and take to no end. There’s a moment when her inherent good side just says ‘stop’. It’s not done easily, and her hunger has shifted her overall thoughts about sex, about being “the good girl” but not to the point where she has lost her soul.

Adina’s body continues to transform, there being two main parts to that. One is at the end of the work when she seems to have angel-like wings, the description of which I loved and thankfully seems to be pushing Adina away from being a stereotypical succubus in her form. There’s also a bit of breast transformation as well. For much of that it doesn’t seem to be silly or over the top, but when in the midst of feeding, things just went into the realm of silly, huge, and it really didn’t do anything for me. Other transformations would have been fine really, and they are suggested, but giving her huge boobs just didn’t appeal to me.

Overall this week mainly focuses upon Adina having her first large feed and how that plays out. Some of the mind control and use of her succubus powers I enjoyed, some weren’t quite so well done. There’s one scene in the aftermath when Adina uses her powers to shift herself from the party back to her dorm room and in that moment her powers seemed… odd. During her feeding, Adina lost her clothing, which was fine. When she returned home… they were neatly folded on her bed. I can’t quite figure out how that works and it was the single moment in which the story came to a crashing halt for me. That said, otherwise all else Adina did made sense and had one lovely heat.

I’m still unsure about the main theme of the series. While the work focuses on Adina, there seems to be more and more ‘monster girls’ appearing. I’m not really seeing a need for them honestly, they are fleetingly in the telling of the story, and don’t seem to have much of a point in being there. Hopefully that part of the series will come into focus as for the moment it seems lost.

Adina is wonderful, I love her as a succubus, how she is dealing with things. But as this work arrives at the conclusion, there seems to be a shift within herself, as if the succubus within it taking over bit by bit. I’m hoping that Adina doesn’t turn evil and stereotypical because that isn’t a story I would be interested in.

I’m interested in the girl with a conscious that has to deal with sorting out her life, herself, and what it means to her. Losing her soul for the sake of the pleasures she’s felt seems too thin and weak a storyline. I’m expecting more than this, the author has been very focused on Adina’s moral compass. Watching that spin in circles will take the series on a track that I hope will result in what I think it will.

The series remains a good read, Adina I love more and more with each work in the series. But things seem to be stalled, losing their way to a point. We’ve have Adina’s first real wild feeding, but the world is changing and there’s no explanation. There needs to be some movement about why things are as they are, but also, there needs to be something else.

The series is about Adina, or at least the title says it is. Is it really necessary to bring in more “monster girls” for the sake of a sex scene? This time it worked. I’m going to hope the author doesn’t fall into a meme that will take away the promise I see in Adina herself.