Succubi Image of the Week 431 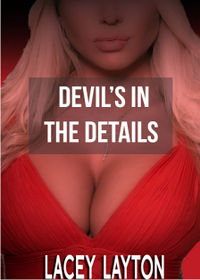 Devil’s in the Details by Lacey Layton

One of the more popular themes is when there is a challenge given, someone accepts it without thinking, and then they find that the “Devil” holds all of the cards and did so from the moment they appeared.

But even a Devil can manage to do something good in the end… sometimes. Even if they need to get in a last shot in the end for the sake of what they are.

Derek, a young and successful lawyer, has a strange woman claiming to be a Devil in his office. The strange woman says her peers want him to join their ranks. But she thinks differently. She think the tough alpha male, the charming personality are nothing more than ruses for what he really wants. A woman to take control. Now Derek has a game to play. If he wins, he gets power beyond his dreams. If he loses, the woman is going to make sure he gets what he really wants.

Derek has been a liar, a cheat, and done his own share of evil for a long time. An encounter with a woman in red who claims to be a Devil offers a deal. Three tests and he can have power. If not, then what she believes he truly is will be his reality.

Derek is unlikeable, both in action, personality, and view of the world. There’s very little positive within him, being a little stereotypical in how he acts, what he says, and how difficult it is for him to accept there is a Devil in the room with him and focus on that problem. But then she’s more of a succubus than a devil in a lot of ways.

The devil is never named in the story, which is a shame, but there’s quite a lot of personality to her and beyond that, she’s the most interesting character that appears in the work. That isn’t just form her sexuality, but rather there’s a cloaked dominance that comes out over the story and I think that just worked really well.

While there is story, there’s a lot of emphasis placed on the erotica which has some hot moments as a whole. There’s a touch of mind control, domination, some personality changes and so on. She’s less a devil than a succubus as she tends to be more concerned with lust than anything else. But that’s not to say that there’s a good expression of her being dangerous and still look like sex in red.

The writing is very good, there’s nothing that took me out of the story. I would have liked more story about who she was than there is. I also would have liked more about the aftermath, what she did along the way. There’s a lot of questions about her not told and in that I just found the story lacking a bit. Not giving her a name was, as a whole, the single biggest thing for me as just calling her Devil all of the time didn’t work as far as I was concerned.

The story came up a little short when the erotica appeared. There were moments when I wanted her to explain more, tell about what was happening. I felt that she could have been more dynamic and unique that just pushing things in a certain way, for a certain purpose. There was some stereo-typicalness in her that continued through the work to the climax. The conclusion was a bit different than i expected and I think that it made the story turn in a way that reflected that. But in the end, I wanted a little bit more about her than what came.

An interesting mix of erotica, manipulation, truth and consequences. I would have liked to know the Devil’s name, for one, and more about her than the little vague hints that were given. She was interesting in many ways and that was what kept me in the story to the end.