A Review of The Wrong Woman by J. Scrimm

Not the accessories a Succubus costume needs

A Review of Binding the Beast by Eric Stray 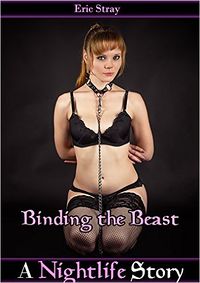 Binding the Beast by Eric Stray

A review today of the second work in the Nightlife series by Eric Stray. I reviewed the first work in the series a short time ago and you can find that first review here on the Tale. I really loved the first work and I wanted to know more about Mirri and Rachel, the two succubi in the story so far. In the second work, the author opened some interesting parts of each of their personalities, gave some insight to who they are, their hopes and fears, but something more. Their souls.

When one has to face their own fears, there are few choices. One of the hardest is to believe in not just yourself, but the ones that believe in you. You might be asked to do the impossible. You can bend or break, either can be, if you can decide which is the right answer.

Seeking new additions to their peculiar workplace, Mirri the succubus and her friend Rachel go on a recruitment mission. Making their way deep into an arcane-created forest, the girls seek to cure, and retrieve a woman cursed by the infamous Queen of Flux: a godlike sorceress long thought to have been sealed away. Danger lurks all around them in the form of the beast they hunt, the past they’re about to uncover, and their own insatiable hungers. Only time will tell if they’ll make it out of the forest alive, unchanged, and unbound.

Mirri has found her home and it is everything she could imagine it could be. She is wanted, needed and has found something she never expected, a friend. A quest takes them both into a world where things aren’t safe, aren’t what they seem to be. When push comes to shove, Miri needs something she’s never really had before. Trust.

The work follows on a short time after the first work in the series, and there’s been some really interesting changes to both Miri and Rachel from the first page. The tone of the characters are more developed, there’s a real connection, friendship, trust between them that began at the end of the prior work and has really blossomed here.

Along with the broadening of their characters, there’s quite a lot of each of their own needs, questions about themselves, a bit of feeling lost and then comparing each other against one another. I found that telling because it made both characters more real. Neither is perfect, and that really comes out in this work. The introspection that each has about themselves, about each other, is wonderfully told and I loved that dearly.

For Miri, I thought the slight undertone of her becoming somewhat addicted to her new life, when she transforms herself into a bimbo personality, told a lot about her. There’s a craving within, one that’s hard for her to resist and that battle does a world of good to making Miri shine in the story. For Rachel, the admissions she has, of being needed, of wanting to be told that she’s great, better than great, belies something deeper within her, something that she’s been hiding and when that comes out, the moment she shares with Miri works perfectly.

The main plot of the story is an adventure wrapped in a mystery and as that unfolds the reality around Miri and Rachel shifts and changes, but that isn’t something really obvious for the most part. It can be a little confusing at times, but that’s part and parcel of what transpires. Sorting out what is going on, when it does, takes some time and at one point the turn takes the work into the realms of asking just what is real and what part of what you see can you trust?

There’s a smattering of erotica in the work, a bit of self-pleasure for Miri complete with a transformation that I thought worked well. There’s also a short scene between Miri and Rachel that fit them in a lovely way that I enjoyed as well.

The climax of this work brings about a slew of questions and not many are answered by the end of the work. But that’s perfectly fine as the final line reveals what seems to be a major series plot point and one that seems to be shattering for them all.

I’m really looking forward to seeing how this plays out, whether the reality matches the legend and vice versa. The work takes Miri and Rachel quite a distance from where they began, but it leaves other characters not having their moment. As this work does focus on Miri and Rachel to all else, that makes sense and the little bits of remembered past fill in some blanks. Still, the other matters, and really as much as we know about them from the first work, there’s a lot still untold. The ending, and a revelation along the way, suggests there’s something else going on and I wonder about that.

Every bit as enthralling, well told, and wonderful as the first work and a really worthy sequel by far. I loved how Mirri and Rachel are developing as characters, how they have gained their voices in this work, seem to be “comfortable” with who they are. There’s a giant mystery here and seeing  what happens next is something I look forwards to. Perhaps the reality isn’t what was expected, but then, sometimes neither is the fantasy.

The series moves from strength to strength, the characters remain true. A mystery has arrived and where that takes things will be something I will be waiting to see.