A Review of Loving Reflections by LC Cooper

A Review of The Devil’s Playthings by Alana Church 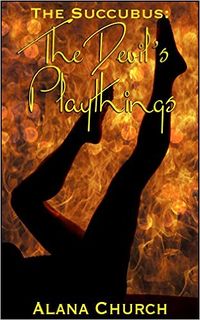 The Devil’s Playthings by Alana Church

A review today of the second work in a new series called The Succubus by Alana Church. I reviewed the first work in the series here on the Tale recently and I noted that I have a lot of hopes for the series overall. The second work satisfies some of those hopes, and opens the door to some interesting things to think about for all involved.

The question of what one wants is an important one. for some it is knowledge, for some it is fantasy. For others is might be forbidden, in some it can be life itself. But in each case there comes a moment when those desires are laid bare, open, the truth revealed. How one either accepts, or rejects, that moment tells the real story.

Dark currents are flowing through the home of Rachel Wainwright. A successful attorney, she has become the unwitting vessel for a succubus. Now, in order to increase her power and to escape the prison of Rachel’s body, Althea is slowly turning the conservative lawyer towards a more sexual lifestyle.

While she waits impatiently for her husband to return for the weekend, her eyes roam, wondering what pleasures might be found among the other members of her household. Will it be her sexy maid? Or someone else? No matter who catches her eye, Rachel and her family have become…The Devil’s Playthings.

Rachel finds her thoughts turning in directions she never seriously considered before. A voice whispering to her, calling for her, wanting her, but she not quite able to understand what it means. Still, she has other things to think about, not least her family. But with those thoughts comes desires, needs and wants. Fulfilling them leads Rachel to discovering herself, her needs, and, along the way, discovering that there is someone sharing her body and mind.

In the second work of the series, there is quite a lot of character development involved that answers quite a number of things that had been bothering me in the first work, not the least of which is… just where is Althea’s body and what has happened to it. Thankfully the author gets that question out of the way very quickly and in doing so serves to add even more questions about Althea herself that I now have spinning within my mind.

Along the way, there’s a moment where Althea comments about what succubi are in this universe and in that moment about a thousand new questions about the succubi, and Althea, came to mind. Personally I think her description is wonderful, but the thing is, now I have an expectation that the author will allow the series to tell that story, to have Althea and Rachel involved within that role and see what happens with that.

Rachel’s family, her husband, son and daughter, are focused on more in this work than the prior and in doing so, some of their own personal quirks, personality and sexual, are hinted at, or laid bare. As well a new character, Maria, in introduced and I simply adored her and dearly so. There’s something very real, very truthful about her, there’s nothing separating who she is from what she appears to be and I think that really works well.

There is some conflict amongst the characters, but it isn’t strange, odd, or creates moments where the events simply feel wrong. They make a good deal of sense, feeling in many ways like the connections, and missteps, that all families face. There are, of course, some that are quite unique, and in being so, they offer Althea something to think about, to consider, and, possibly, something that she herself needs most of all. A purpose.

There are two really quite well done hot flashes, both of which have Rachel at the focus. One tells of a desire another character has, one tells of Rachel’s desires and Althea’s feeing of them. There are also two other, quite short moments where the erotica is used to tell of a character’s needs and in a way that doesn’t make it seem like an information dump, which worked really well and kept the story alive.

One of the plot threads comes to a close, but in that a door opens to allowing Rachel to be herself and not have other things distracting her. The means to that, what leads up to Rachel’s surprise to her family, I liked because of the passion that Rachel put into her words and what it made happen. Along the way, Rachel gains something she’s wanted, and the reason behind it, I hope, Althea will have something to say about, if for no other reason than Rachel’s family after her admission to herself about what she has been missing.

The development of the characters is the real focus in this work, but along with that comes the background I wanted to know of. Defining the succubi as the author did, has my attention now. Revealing where Althea’s body is leaves a huge question to answer. Giving voice to Rachel’s family, in all they hold within, tells of the story to come.

Really a stellar followup to the first work in the series and I thoroughly enjoyed this work as much as I did the first. A wonderful read, many things to think about and ponder, and the ending, which is so very short, is a bit of a cliffhanger, makes me wonder what’s coming next. Obviously that will be Rachel, at least, but somehow i think that Althea won’t be disappointed either.

Everything I could have hoped for as a follow up in the series, offering much to think about, smile over, and adore. There’s much still to be told, the mysteries still abound and as they become answered I think the series will continue to shine…