A Review of Vanity Mae and the Electrician by K Tucker

A new level in Devil Costumes has been reached

A Review of Demonic Daughter by Eden Redd 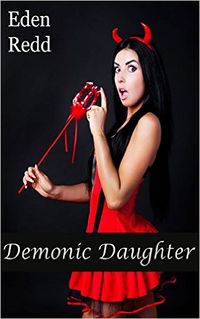 The origin of a character is, at least for me, something important, more so when they are, at least partially succubus in nature. Teasing that point, but then doing nothing with it takes a lot away from the story.

It isn’t enough to simply suggest they are a succubus, then have them jump into bed with every other character in the story. Saying that they have power, but then setting that aside for the sake of reading a hot flash that isn’t all that hot is a problem. The story can be better if there’s something to hold one’s interest in it.

Shortly after Sally’s 18th birthday, she starts to feel strange and unspeakable desires. The more she tries to push the darkness away, the more it pushes her to try unthinkable acts. As the darkness grows, it leads her down a path where her desires bubble to the surface. She has often fantasized about the men of her home and now she feels she has the power to fulfill those devilish thoughts. The more she tries to stop to herself, the more she hungers for the men who belong to her.

Sally has discovered that she has some odd powers and the more naughty she is, the more powerful she becomes. An encounter with her stepbrother reveals much of what she can do, but it is her stepfather that reveals what really is going on.

The work is, overall, a hot flash with very little story tying the pieces together. That’s a shame because there is some plot given through Sally’s memories which seems to say that she’s had her powers for some time now. but they are coming to the fore at last. There’s a lot of mystery around her, about who she is, what she is, and what she is capable of, but that’s never really gotten into within the story.

Even when the reveal comes about Sally, that she’s very likely a succubus at least, that takes up less than a paragraph and is brushed aside for the sake of her getting to her next encounter in the story. Saying that Sally has wings and a tail is fine, but there’s really nothing else told about her. Even her powers, some of which involve a bit of mind control, are interesting, but never play out in the story either.

The story revolves around Sally having her way with her stepbrother and stepfather, and in being so there’s not much time spent on any sort of character development, or plot either. A couple of hot flashes at best, a pair of stroke stories at worst. This really didn’t need to be.

There was some promise in the beginning, that there might be something of a reveal about Sally, which there is, at the end of the work and as well her stepbrother and stepfather. That in itself was interesting and I wanted to know how that all came to be. But that didn’t happen. Soon after the reveal, the explanation about everyone, the story comes to a close.

A hot flash with little heat, a story with a thin plot. Characters that were single-minded for the most part, having no real purpose other than wanting sex, getting sex, and then moving onwards. While the theme is a bit taboo, there’s not a lot of focus on that, save for some moments towards the end of the work which made me cringe a bit.

The author has written other words I liked a lot more. It’s a shame this wasn’t up to the same standards.

Rather thin on story, not much in the way of character development, and really the work just serves as a means to get Sally into compromising situations. It would have been nice to have more story, more about how Sally came to be where she is and what, exactly, she is supposed to be. But there’s nothing to payoff that plot thread and the erotica isn’t enough on its own either.