A Review of The New Neighbor by Ray Garton

The 80s… Big hair, Big boobs and even bigger disasters of B-movies that made you cringe then and run away screaming today. There was, if you can imagine, a movie that had what were described as Succubi appearing as characters was released in 1987. More popularly known as Nightmare Sisters, the film was also released as Sorority Succubus Sisters. 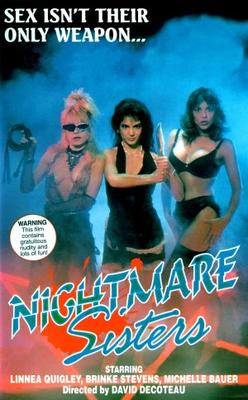 Of course, it is a complete over the top train wreck of a film, and yes I do happen to have a copy of this mess in our Succubi Films Collection of course.

Recently I found that someone had uploaded the trailer to the movie, and as I don’t like suffering by myself and do have quite a lot of throwing grade popcorn to pass around…

Here’s the trailer. Brace yourselves…

And, if you can’t see the video here on the Tale, and you really want to experience all of the “glory”… Try this link:

The synopsis of this… classic… is a classic on its own I think.

Melody, Marci, and Mickey are three geeky college girls who can’t get a date. One night, they invite some geeky college guys over and have a seance that results in the girls becoming possessed and turning into sex starved succubi. Will the geek hero guys be able to stop the horrible possession?

If you really want to know more, you can visit this film’s page on the SuccuWiki and be amazed at the plot, there isn’t one, the fashion, there isn’t any, the acting, there might have been some, somewhere.

It’s really a classic example of a B-movie in every sense, the trailer alone just screams that as loud as it possibly can. I have to admit that I almost wonder what this might be like as a modern remake.

I just know that if it happened, there would be so much horror over the campiness that it would be a real shame. Perhaps the best thing is that this serves as an example of a Succubi B-movie, and for that alone, I think there’s some good in it existing…