A Review of Dungeons and Dryads by Dou7g and Amanda Lash 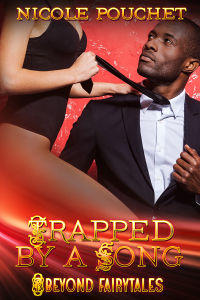 Trapped by a Song by Nicole Pouchet

Many times a Succubus appears in a work for the express purpose of being the “villain”. With that should be, to some extent, something about them that sees to their character not being stereotypical. However, it is also possible for the succubus to turn out to be far less a villain than the humans around her.

Still, misdirection can be a useful thing to keep a reader on their toes. But does it need to be so obvious?

If Detective Jori Anzoli has to do one more telepathic reading for the Las Vegas Police Department, her para-capabilities may fry out. That doesn’t matter when she’s called in to help find eight men who mysteriously went missing. The case escalates quickly. Clairvoyants in the department are scared to touch it, her brother becomes the ninth missing man, and the Paranormal Investigative Agency (PIA) sends a distractingly handsome agent who hassles her every step of the way.

Agent Del Moore is on a mission to find the PIA’s missing biomedical weapons engineer. A retro-cognizant, Del is used to avoiding human contact unless the job demands it. The less intrusive knowledge he has about others, the better. But a brush with the aloof Detective Jori may change his mind. He can’t ignore her warm essence, especially when she impossibly summons him into her dream.

As mounting clues lead Jori and Del to go deep undercover into a Nevada brothel, an ancient succubus preys on every living soul within, placing Jori and Del on separate hallucinogenic paths of destruction. Will they learn the truth behind the brothel and their mission before succumbing to an ulterior plan neither of them wishes to see?

Jori and Del find themselves joining forces, and more intimate things, when they investigate the disappearance of several men and how a certain brothel connects to the mystery. When the truth is uncovered, it seems that what they expected, or thought they knew to be the worst of times is overshadowed by so much more.

The work is, overall, a detective/mystery which works well in the telling, but has a little bit of a problem trying to keep focus on the underlying foundation that it is built upon. There are, as a whole, a lot of “villains” in the work, possibly too many for what transpires and it might take some of the power from the words themselves.

The work loses a bit of focus here and there before the conclusion and the aftermath. It’s the ending that left me wanting a bit, considering the events, and as such the heat and passion gets sidetracked a bit for the murky mysteries of this universe.

The succubus of this work, Prisca, was as a whole quite disappointing. She’s very stereotypically “evil” and “monstrous” in her nature and that was disappointing. Considering all that she had created and done, I expected more from her than what transpired in the story. She was a means to an end, a rather thin one really, and that took away much from her character. I expected something of a more involved, present, and in control personality, but that didn’t come out in the story well I thought.

Prisca was, overall, more monster than succubus and I think that was a shame considering how the story unfolded and what happened when the events came to a close. Sometimes the monsters aren’t the obvious ones. Past that, Prisca didn’t strive as a succubus, but rather more of a thinly disguised drug dealer. Again, I just expected better when she appeared, that didn’t really come out in the story.

Still, the story isn’t about Prisca, it is about Jori and Del and that part of the work did manage to keep my interest, have good heat between the characters, and keep them from being cardboard in their personalities. There’s a good deal of history involved in their characters and that drew me into the story. Their world is complex, but at the same time there’s so much distrust, anger, fear, and more that to live in such a world much be soul sapping over time.

Written well, there wasn’t anything to draw me from the story, the erotica is well told and has just enough heat to make it enjoyable without overwhelming the rest of the story. Still, some parts of the story might have used a bit more “telling” and less “showing” to pull one deeper into things. The one thing that does matter when reading this work is that the details are important, they matter by the end of the story. But even then, there are a lot of questions unanswered, beings that pop in and vanish with little explanation and as such there’s some holes for me in the telling.

An interesting universe with driven characters, However, Prisca was disappointing in many ways as a succubus. While she was a minor character in truth, there could have been more to her than just being evil for the sake of being so.