A Review of Infernal Desires by Prudence Sinclaire

A Review of World’s Shyest Succubus 1: Awakening by Taylor Knobb 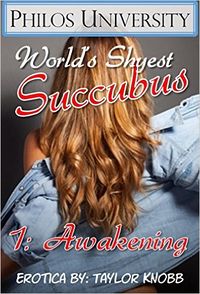 A review of the first work in a new series called Philos University by Taylor Knobb for which I find myself rather amused, bemused and taken by the main character and her innocence.

The theme of an innocent, or if you will, pure soul being transformed into a succubus isn’t uncommon. What is uncommon is keeping that soul true to themselves in spite of all that happens to them. It’s not an easy thing to do when the obvious route would be to make them sex crazed after all.

The world around you can be draped in shadows. A mystery simply because of how you were brought up into it. When temptation strikes, one can find themselves covered by it. The larger question then becomes how one learns their new world, and what they do with that knowledge.

Adina is a quiet, shy, and above all good girl. So one night when she’s heading home from a church service and is caught in what seems to be a blast of magical power that starts to change her, she doesn’t know what to do. The changes start immediately, with a new sort of hunger that threatens to turn her world on its head. She needs something that she’s never needed before, something that makes her turn hungry, lustful eyes upon her roommate Kelly…and something that might help Kelly turn those same desires on Adina!

Adina is, if nothing else, a good innocent girl. She’s shy and really doesn’t know much about the world outside of her cloistered community. Encountering something that she should have known better than to get involved with, Adina discovers her body is changing and her needs are becoming more… physical. Something’s happening and when her roommate comes a little too close, Adina discovers things she’s never experienced before.

The main focus in Adina trying to deal with a very slow transformation into what seems to be a succubus. The majority of the changes in this work are physical, not quite over the top, but certainly starting her on the path to becoming a succubus nonetheless. Mixed into that is a tentative creeping of a turning of her viewpoint from innocence about just about everything to a singular focus upon sex and sexuality, much of which is her own discoveries about the things that “bad girl” must like in her mind.

Adina is, to a point at the beginning, almost too close to a stereotypical good girl and there were points at which I winced at how clueless she was. In the context of her character it made sense, but even so the slightly overwrought moments of discovery made me wonder if she’d ever seen her own body all things considered. When her mental landscape begins to shift, and it is very nice in how subtle that is at first, it brought about quite a lot of character development. Adina doesn’t go from innocent to sex craving mindless being as has happens so often before. There’s still that innocence in her, a good soul that sees she’s doing something “wrong” and needs to make up for that.

It’s this focus in the story that grounds it and makes it more than an excuse for Adina to crawl into bed with her roommate. There are two scenes that focus on erotica, one is some self-pleasuring which was lovely and hot, the other is Adina and her roommate loosing themselves in Adina’s powers which has some succubus mind control mixed in with some heated erotica that was lovely and I liked both quite a lot.

The work is short, there’s a skimming over about how Adina it transformed, which I hope will get better explained, and there is a need for perhaps a bit less of Adina being singularly thinking about sex and her reactions over it, which happens almost every page in the latter part of the work.

The story is well told, I like Adina very much and because I do, there’s a worry about this series that I hope the author can avoid. I really wouldn’t like for Adina to be lose within the succubus when she fully appears. More so, I really don’t want her to turn stereotypical, and if she has hooves I will not be thrilled at all. The story has a purpose, a voice in Adina, that has to remain throughout otherwise this is just a means for writing her into constant sex scenes without meaning. That would be the real shame of all.

There are a few odd word choices for actions that Adina takes here and there which are a bit confusing, but that well may be just a choice the author made. Otherwise Adina is a captivating character, the story has purpose, plot and direction. The erotica is not over the top and when the little first hints of Adina becoming a succubus peek out, there’s a delicious duality in her inner thoughts, what she does, and how that all unfolds and the aftermath that Adina has to deal with.

A cute story about an innocent beginning to figure out that something isn’t quite right, but having no idea as to why. Really a unique take on this particular them which I enjoyed. However it is short, really needs to be fleshed out more and perhaps more time needs to be spent in Adina facing her changes a bit more rationally rather than being just completely out of touch with what is going on.

There’s quite a number of mysteries here to unravel, many of which I think will be interesting. There is however a danger of the work turning Adina into something she isn’t, a caricature of her innocent self. I really don’t want to see her lose who she is for the sake of an ongoing series in which she just goes from sex scene to sex scene and nothing more. I feel like that isn’t likely, but it is a trap that is far too easy to fall into. The next work in the series is titled “Playing Doctor” and that concerns me. I dearly hope I am wrong for the promise I see in Adina herself.