A Review of World’s Shyest Succubus 1: Awakening by Taylor Knobb

Never Need To Be By TeraS

A Review of Infernal Desires by Prudence Sinclaire 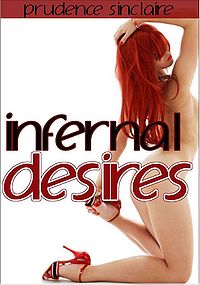 There are some works I review which, sadly, no longer can be found. It’s more the shame when the story is actually quite interesting, is written well, and tells a story that is different in its own way. This particular work is from several years in the past, but like all works about the Succubi and the Incubi, it too deserves its moment of recognition.

There comes a time when a young succubus has ‘the talk’ with her mother. She learns about what she is, what she can do, and about what it’s like to taste a soul. But even after having the talk, that doesn’t mean that she’s going to be able to control herself, her powers or that of those around her…

Victoria had never been so embarrassed as the night she almost ate her boyfriend’s soul. After a quick talk with her mother, Vicki learns she’s a succubus who’s just come into her powers. As Vicki struggles to control her newfound abilities, will she remain true to her human intentions or will she give in to her demonic lust?

Vicki finds herself having a problem. She has a boyfriend, but almost took his soul. Her mother has explained that she’s a succubus, and Vicki is one as well. The problem comes in that Vicki can’t control her powers and there are a lot of people wanting a piece of her. Life’s hard when you are a succubus after all.

This is really a cute and fun work that has a slightly different take on being a Succubus that I did rather like. The work focuses on Vicki, what she experiences, and all that comes with her succubus powers coming into being. There’s a touch of mind control here and there, some nicely hot scenes of erotica as well. But what’s more interesting is Vicki’s reaction to everything that she experiences and, most of all, the talk she has with her mother.

We never see Vicki’s mother, though we learn she is a nurse, has a very open idea about sexuality. Oh, and she is a succubus as well. There is a little bit of “evil” in one of her comments, but that’s pushed aside by Vicki’s humanity that comes through in spite of what her emerging powers make happen. Really there’s very little said or told about Vicki’s mother and that’s a bit of a shame as I would have liked to know more about her, Vicki’s father and so on. It’s a bit of an open mystery, only teased at, and it would have been nice for that to develop further.

While there is story and plot, to an extent, the majority of the work focuses on Vicki encountering, and then suffering her way through some sexual situations which then eventually climax in her having a threesome with her boyfriend and a roommate. While she does get pushed to the edge, in more than one way, she doesn’t turn ‘evil’ but rather she’s more of a sex dream in a way. I liked that, and hearing her thoughts as things developed, how her new needs as a succubus became more and more pronounced was very hot. I thought the description of seeing a soul was quite unique, and more so what Vicki’s reaction was when she finally had but a taste of one.

The work closes with Vicki wondering what she can do with her powers next in the aftermath of being “charged up” but the work closed on that point, not going any further and leaving the rest to the reader’s imagination. As such, the work is very short and that’s a shame.

There’s several good ideas here, some interesting characters, and Vicki herself being the most interesting of all. The work clearly leads towards another book, but that never came to be. The work was removed from Amazon, the story lost, and it shouldn’t have been. There’s promise here, and it should have unfolded.

A cute and fun little piece of succubus erotica. A little mind control, a little fun, and a story that sadly never continued onwards. It’s a shame because Vicki is really quite likeable, and to see what happens in the after, as she becomes more sure of herself and her powers, would have been very interesting to see.