A Review of Lighting the Fire by Carley Rose

A Minion perhaps, a Succubus costume not

A Review of Demon in My Bed by Heather Lewis 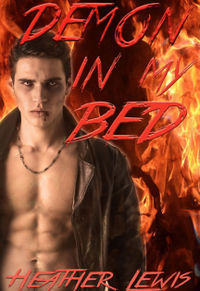 Demon in My Bed by Heather Lewis

It’s nice to find a story where the erotica isn’t the be all and end all. It’s important that there be story, characters, and a hook that keeps my interest. For the most part, I prefer there to be more meat in the story than simply the description of the beefcake, or cheesecake for that matter.

Story needs to have a main character that one can emphasis with, hope for, and in the moments where everything looks bad, you hope for things to turn out right. Sometimes that happens in ways you never quite see at the time.

Blair Evans has had a rough go of it lately. When she’s not flipping burgers at a roadside diner, she’s trying to scrape up enough money for culinary school. When a grandmother hardly knew dies and leaves her a small inheritance, Blair thinks it’s the answer to her prayers. There’s a slight catch…

The inheritance comes with a haunted house. Pennhalow isn’t exactly the stuff that dreams are made of. Amongst the dust and filth of decay, Annabel is certain there’s a diamond in the rough.

Blair finds herself caught in the middle of a fight over holding onto a home that isn’t a home any more, a family that hasn’t been one for a very long time. In all of the moments that give no comfort, her dreams offer something. But when she figures out what that is, does it matter at all in the first place when her hold on what’s most precious to her now is slipping away?

The thing I liked most about this work was that the characters, minor or main or otherwise, are all well written, have depth, and are, in their own ways, interesting and captivating. There are some, of course, who are dislikable from the very beginning, and in being so their hidden tugging on Blair does a lot to shape her thoughts and guide her going forwards.

Blair is, to be clear, a very strong willing personality, and I loved her outlook on things, how she muddled along when she needed to, but at the same time, she had an inner strength that popped out to the fore at the right moments to make her character that much more likeable and in being so, you hoped that she would overcome the roadblocks tossed up in front of her.

Seth, the incubus of the work, isn’t stereotypical and the connection between himself and Blair is lovingly crafted, has some delicious heat, and in that, though he is a mystery, becomes central to the story without being overbearing. It’s a very hard thing to manage as there is a tightrope being walked between Seth and Blair that could have gone too far into a store which the heat would have smothered the story, but it didn’t.

As the story unfolds, there are a lot of secrets that come out, many of which are, especially for Blair, shocking. In all of the things that pile onto her, all of the problems, issues, fights and battles, there’s a certain satisfaction when the story turns towards wrapping up the loose ends, telling of what happen, and, more importantly, what Blair does finally and how that relates to Seth as well.

The ending leaves a wonderful open ended question about what exactly has happened, what it means, and if the outcome is all that, considering the story as a whole, it should be. There is such a thing as a happy ending sometimes and in this case the ending was the best it could be I felt.

Well written, there is a good sense of place, of the characters and their differing accents, personalities and actions. The work is a complete story, there isn’t a feeling that something was left out or held out. Simply a lovely story about finding hope in the dark around you.

I’d have liked the work to be a bit longer, perhaps tell more about Seth and his connection to Blair’s relation and what that might have meant, if anything. It’s a bit of a mystery, one that would have been nice to know, but didn’t take all that much away from my enjoyment of the work overall.