A Review of Scarlet Dreams by Jeanna Pride

A Review of the Blood Prophecy series by Kathi Huggins 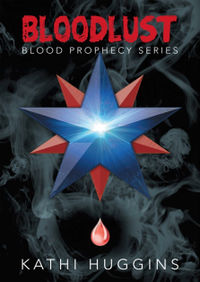 There are some characters who are a mix of different supernaturals. Part of their character is trying to deal with, for example, being a succubus and were of some kind. This sort of theme can add something to them if the rest of their character can support everything else. There is the struggle, the dealing with mistakes, and, sometimes, coming to find a means to otherwise solve their own internal struggle.

This can, of course, become very complicated, and when there are eight different “you’s” to deal with… That’s not fun. It also makes for an odd definition of the word “time-share” too…

The series tells the tale of:

Jade thought she grew up with the best dad ever until she’s kidnapped. Her life is turned upside down when she learns he has kept secrets from her for her own good! There are 8 pure species of supernatural beings as well as mixed bloods, combined species. The purebloods feel they have superior bloodlines and look down on mixed bloods.

Jade is mixed with most of the species; Vampire, Lycian, Angel and probably Succubus, knowing nothing of being Shifter, Faye, Demon, and Jinn the most powerful species, and that she would have a mate for each.. There was a war coming and she was at the center. Now it’s wait and see what the purebloods will do when they know it’s Jade they seek.

The core of this series revolves around Jade, who seems to be the centre of a prophecy and now she has to deal with what that means. One woman with eight mates to keep under control is not an easy thing to do. Worse so when the entire world is trying to kill you. Still more so when you are the only hope and all you really want is to, somehow, be happy.

Jade’s main problem is that of all of her “selves” the most complicated one is what she calls her succubus, this being the last of them to come out and in doing so, Jade simply craves sex. It would have been interesting to see that to be more of a struggle over the series, but almost from the beginning, she is given a means to control herself, supposedly, which then opens the door to the rest of the series to unfold. I’m not sure that really was the best means to deal with what otherwise would have been. As the series goes on, it is hard to say if it actually worked, considering how much sex Jade gets into over the course of the series.

All of Jade’s mates are vastly powerful beings, to the point where the Archangel Michael is one of them. Her father is Luc, better known as Lucifer, and for me, he was the most interesting of all of the characters in that he was a father first. There’s not much seen of his “other role” and that I think made him different and more interesting because he could be a father that only wanted the best for his daughter. That comes out over and over again in the series and compared to all of the fighting around Jade, it was a refreshing thing to see. There is also, for me, one wonderful character who bakes cookies. In truth, they were, many times, so much more interesting than all of the others around them for one important reason. They spoke plainly, truthfully, and understood what happened around them and didn’t judge. The young are, many times, wiser than all if they are listened to.

There are some oddities in the works, mainly in some of the dialogue that doesn’t “flow” well at times. It reads a bit stilted, and if one read the dialogue out loud that becomes obvious. There are a massive number of characters to keep track of, some of which are present a lot of the time, some that pop in here and there over long stretches of the series. There might be too many minor characters as a whole considering that the main character list runs to something like 15 individuals and there are probably as many, if not more, minor ones.

The erotica, at times, becomes a bit repetitive, as Jade finds each of her mates, she joins with each. Most of the time it is Jade being dominant, sometimes almost equal, and only once is she submissive to one of her mates. However in each, the scenes follow the same path of discovery, disbelief, acceptance, and then, in the last, the characters are joined and then it is off to meet the rest of the partners. It does wear a little thin, and occasionally gets in the way of the main plot and story trying to develop.

The storylines have their moments, there are mysteries to solve, relationships to battle over, the coming of children is, in its own way, a strain on everyone involved. Some of the threads aren’t solved, being left open for, what I assume will be, the last work in the series. There is a good deal of “doom and gloom” that hovers over the work as well. There is some sidetracking as well, and a lot of time passes between some of the chapters using one of the more different means of moving time forwards.

The work is, as I have noted, a little uneven and that does make for some passages where attention wanders and staying with the story can be difficult. The series does tend to, as each mate is found for Jade, close off that thread and bundle it into the main issues that Jade deals with, occasionally working, sometimes just seeming a little odd. The one thing that does become tiresome is how often Jade’s mates fight over her at times, some trying to control her, some needing her to live, others unsure about the entire arrangement at times. This is a stumbling point for the characters, over and over again, and I wonder if there can’t be a solution to this that allows the focus of the work to move from who’s dominant to some kind of understanding. Perhaps, in time, the children will make that happen… We’ll see.

I’ll give the series three and a half out of five pitchforks.

The erotica becomes a bit repetitive over time, some of the scenes in that feel very deja vu. The work is very complicated, needing the reader to keep in the story even when it stumbles over itself to keep going onwards. The writing occasionally is a bit stiff, the dialog sounds a bit off here and there. But the core idea of the work, that one’s blood doesn’t matter, it is who you are, and what you do with your life… That holds everything together and makes this all work.

The third work in the series, Bloodrites, has been published, I expect that, like the rest of the series, it will have its own interesting moments. Especially since an incubus will finally appear. The review of that work will appear… shortly…