A Review of the Blood Prophecy series by Kathi Huggins

A Review of Scarlet Dreams by Jeanna Pride 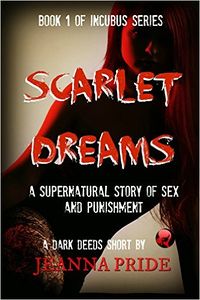 A review of a new series today which has an incubus as the main character. There are some themes that I simply do not enjoy. Abuse, pain, suffering and so on, do nothing for me regardless of how the story might be presented. I cannot find a way into such stories and when this all is wrapped around a domination theme, my view becomes quite a lot dimmer for reasons that shall remain my own.

There are some things that lurk within one’s soul that are very dark indeed. But the darker truth is when the light is taken away and all that remains is the darkness inside.

Mandy, a bored and frustrated Manhattan housewife realizes her dark fantasies when she takes control of her husband and releases her frustrations in a very sexual and dominating way, all with the help of Incubus.

There is a darkness in the human soul that attracts incubi. It calls out to them and in that comes the soul itself in which the darkness needs to consume. But also with the soul comes the heart and the mind. Never are they alone in the decent to darkness.

The singular theme of this work revolves around domination and that being very dark, brutal, and heartless most of all. While some will enjoy these themes, personally I couldn’t find my way into the story once Mandy’s darkness came out and the suffering for another began. Before that point the work was interesting, it told the story from a rather unique perspective from the incubus and I thought that worked exceptionally well.

It was when the “erotica” started, when Mandy encountered the incubus that the story started slipping away from me. Really the darkness was on the edges, a temptation. Then the work moved into the dominance theme, the pain, suffering and control through that along with the humiliation and that’s when the story came apart for me. I can’t accept the abuse of a submissive. To me that’s an abuse of trust, at the best, a crime at the worst.

But the work is billed as a dark story, and it really becomes that at the halfway point. There’s nothing of light to be seen, no hopes, only sheer domination of one character in every possible way which involves some sort of abuse and belittlement. The thing of it is, at least in the frame of mind of the main characters, is that it makes some sense. By that I mean the lead up to that point makes what follows reasonable for all of the characters, regardless of how awful some of those moments are.

The ending of the work leads towards the next work in the series, but also brings up a question about Mandy herself. I feel like there’s a hint she might have taken the first step to becoming a succubus and that brings up some questions as well. Being there is a dark tone, and how the incubus acted, I really hope she won’t be stereotypical and that the incubus himself can prove to be less so than he was in this work.

The writing is quite good, there is some character development, even it I found it to be a little uncomfortable at times. The erotica didn’t have any heat for me, and being so the story had to support my interest. Half the work did so, the other half lost me along the way.

I didn’t care for the pain and suffering, even if it was deserved. The characters aren’t attractive to me, though there is the thought that Mandy might become a succubus in the next work, which might be interesting. I’ll give the next work in the series a look, but the darkness and pain so far makes things a difficult read when I can’t find my way in.