A Review of Eastern Jam by Gwen Alexander

A Review of Monsters of Pittsburgh: Succubus by Kate Whitaker 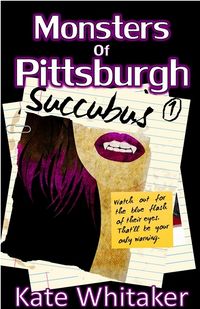 Succubi are not always the main characters of a story. Many times they are minor characters who appear for the purpose of moving the characters and the story forwards. Most of the time when this happens, there is, at least some, sort of meaning behind them.

However, at times succubi are simply cannon fodder to show what the main characters are like in a crisis, or to draw out their sexual natures or, sometimes, just window dressing to the larger story.

That’s not always a back thing when the succubus herself is so uninteresting and takes away from the plot as a whole. More so when the purpose of the work is to drop the reader into a universe running at top speed and leaves the reader trying to catch up.

The Steel City has never been colder for Rick and Mina. On the rebound, they’ve spent the last three months doing nothing but sparring and killing monsters. In an attempt to break out of their rut, they decide to spend the night dancing and boozing at a club. Unfortunately for them, the succubus was there first.

Rick and Mina take a break and go to a club, but there is a problem. They are in the monster and demon hunting business and business has been much too good lately. Arriving in the club, they soon realize there is a succubus there… and she’s hungry.

This work is the first in the Monsters of Pittsburgh series by this author in which a group of hunters have to deal with the supernatural beings around them, within themselves, and those that they have to work with every day. The thing about this work is that the series begins in way where it feels like there is something that happened at the beginning of the story that isn’t explained or touched on much. As a result, there are references made and idle comments which don’t make a lot of sense in the first work, but as the series progresses, it makes a lot more.

Still, in this work, there are a lot of questions that aren’t answered and there are relationships that the characters know about, but the reader doesn’t. So, what happens is that things are a bit confusing at times and that’s a problem as there are a lot of subplots and events that come barrelling through the story, but don’t have a payoff in this work. They will, one assumes, later in the series however.

The work does not have the succubus at the core, who is not named in any case, and as such she is a very minor character. She is hinted at, in a round about way, for some time and the two main characters talk about what succubi are, how they hunt and feed, which I thought was really very interesting. However, in spite of the concepts, and for that matter her appearance, she acts very stereotypically for the short time she appears in the story.

The work really only uses the succubus as a means to show the main characters in action against her. Beyond that there wasn’t really any purpose for her in the story. The main point, that of getting the series up and running, is handled quite well by the interaction between the main characters and the supporting characters in the story. I suppose there needs to be some sort of conflict or source of tension, but here again, that tension is strong enough between the characters that the succubus could have not been part of this work. As well, the small amount of erotica, which is very quick and doesn’t really take the characters anywhere, didn’t really need to happen considering where the story ended.

But then this isn’t a work of erotica, it’s more of an action-adventure story and in that tone the story is well written the characters are interesting and I liked that it was so. It creates a strong and vibrant setting to base the series on, it allows for the main themes of the series to be explained and give direction to the characters and a mystery to deal with.

But as a succubus story it really isn’t one. There is a succubus, it’s interesting to watch the hunt for her unfold as it did, and it told of something interesting. Thing is that really nothing is done with her save a bit of mind control, taunting, and then a very one-sided resolution to things.

I’ll give this three out of five pitchforks.

There are further works in the series, which is a pleasant surprise considering how many series start and then fail to come to be. They all deal with various beings in their own way and build upon this work quite well. An interesting premise with interesting characters, which is always a good place to start…