A Review of Holy Hell: A Mistress Victoria Fantasy by Vivian S. Vice

A Review of Supernatural by Juliette Lubach 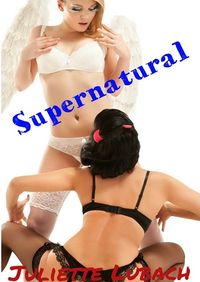 Not all stories that have a succubus appearing in them make that character out to be something more than ‘just a succubus’. Sometimes she is evil, really over the top so, and sometimes that turns out to be interesting. Sometimes not so much so when it’s hard to get past some of the things she does.

She can simply be a means to drive other characters onwards, or a method for showing how evil she is compared to others around her. But that can be pushed a little too far and when it is, as a whole, that can hurt what otherwise can be an interesting story…

Valerie Thomas didn’t mean to get involved with witches and demons. All she was looking for was a way to live out her carnal fantasies. In her pursuit of love in the arms of two sexy, mysterious women, Valerie learns so much more about the supernatural world, and about herself. Now they’re hot on the trail of a beautiful runaway Succubus who never should have been released from Hell.

Valerie meets two witches and finds herself brought into their world. A chase to find a succubus begins and during that Valerie finds out some things that she didn’t expect. Choices are made, for good and bad, and in the end only Valerie can make things right, or wrong.

Morgan is the succubus in this work, and at the beginning she is, as a whole, rather likeable. She doesn’t feel evil in a lot of ways. However, when she is ‘demoted’ for a mistake that makes little sense, something snaps within her and then her personality turns and twists itself around being what amounts to a cruel, nasty thing. When this happens, which takes a little time, then her appearances in the work become quite hard to read at times. It also gets more confused when the story switches between Morgan and a man she last encountered as a succubus who is infatuated with her.

There are a lot of sad, broken characters in this work, Morrigan and Daniel being the main ones, but there is such an undercurrent of nastiness that recurred over and over again that, at times, it was hard to stay in the story and not skim pages. I understand that this is their development as characters, but honestly it seems to be a bit too much at times for my liking.

There are, from time to time, short passages of erotica, but they run the gambit from warm to hot, tending towards warm as a whole. Again, this is in response to Morgan’s actions, when it is warm or less so, hotter when Valerie shows her love for her friends. Both have their moments, and it is a contrast, but the unevenness is a little disappointing.

Overall, the plot is interesting, has a bit of mystery and there were moments when things worked in that. There were some side trips that didn’t make a lot of sense when they happened, but, later on, were explained and then the pieces came together. There are quite a lot of quirky and odd characters to add flavour to the work, which works in a lot of ways. Possibly the most interesting passages are when Valerie meets someone she never expected to and then finds out who she is, if not why she is there.

The work ends in a way that is a bit of a letdown when all that came before is considered. A new character appears out of thin air, there is conflict and confusion, and when some kind of answer is found, it really isn’t an answer. I’m not sure this was the best way to bring things to a close, unless there is another work coming to continue things forwards. There was, in a way, a better ending in the chapter before the actual ending, which might have been better at least to me.

There are a few, very minor, editing mistakes in the work, but nothing that really took me out of the story. What did make me turn the pages and skim a bit was when Morgan did some things that I wasn’t comfortable in reading. While that was part of her character, it took much of the good from the work and I wish that didn’t happen.

Getting past that issue, the balance of the work has a decent plot, good characters and everything connects in some way which works well. But Morgan’s actions and the ending are the stumbling points for me.

The main thing that bothered me was some of the brutal moments that Morgan involved herself in. While that was her character, it was a bit too far for my tastes and, as such, it took a lot of the enjoyment of the rest of the work away. The world is interesting, certainly unique and unexpected. The metaphysical discussion at times was surprising and I liked that. The ending feels too short, too abrupt and too formulaic for my liking. Still, it does leave an opening for the story to continue some time… We’ll have to see.