A Review of Manhattan Sucks by Dou7g and Amanda Lash

A Review of Vetusis: A Short Paranormal Mystery by Shelby Blake 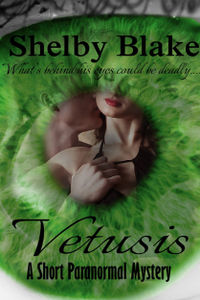 It’s more interesting when the truth is discovered and one isn’t quite sure of what the truth is, what happens when it is found, and what the aftermath really is. Perhaps that is the true mystery and horror. Not the physical moments, but the ones that unfold in the mind.

What’s behind his eyes could be deadly….

When Angeline agrees to a simple girl’s night out with her co-workers, she doesn’t expect to meet an attractive–and wealthy–business man. But what’s beyond those green eyes, may be far more than she ever bargained for.

He’s not interested in her body, only her soul….

Angeline goes out with friends and finds herself chatting with a man, Over time that chat turns into something odd, strange, unsettling. When the truth comes out and what he is becomes known, the real question is what does he really want? And is Angeline able to refuse him?

The work is more physiological in tone rather than being sexual. There’s very little erotica in the work which actually causes the tension within the story to grow uninterrupted. In doing so the story is very strongly written, the characters have some excellent depth.

It is the uncovering of the mystery, what everything means, and what comes next where this work shines. Piece by piece the mystery takes unexpected turns and the mind games that are played through the story are quite well done and I enjoyed them.

The question is, at least for me, whether Vetusis is succubus or incubus-like in makeup and I think, overall, that it is. But it’s goals are a bit vague and uncertain and that brings with it a bit of confusion here and there as the characters confront it.

The climax of the work tells of the strength of Angeline and what she is willing to do. Really her strength is throughout the story and the ending just brings that into sharper focus. The ending did leave me wanting a bit, as it is unclear and vague, but really that’s part of the charm here.

As I have noted, the work is well written, though with one rather glaring misused word. There is also a bit of confusion in the last few pages of the work, but that I felt was to reflect the situation that Angeline found herself in. As well, one more editing pass would have helped at some points where the story read oddly or the dialog seemed a little off.

Is Vetusis a succubus or incubus? Possibly. The hints are there and it does make sense with what he does in the work and the story told of him. It’s a unique take on the myth and I thought that was well done in tone and form. The issue comes to a bit more editing and perhaps a little clarification here and here in the work. An excellent mystery to watch unfold and as it does that story is telling.