A Review of Bad Dreams by Brantwijn Serrah

Lots of red, but really, this isn’t all that much of a costume…

A Review of Lair of The Succubus by Sheba Griffins 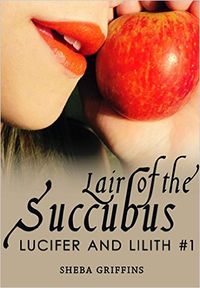 Lair of The Succubus by Sheba Griffins

A review today of the first work in a series called Lucifer and Lilith by Sheba Griffins which has an interesting premise as a whole, but gives me pause. The thing about using such characters is that there is a certain viewpoint that readers have of them. Being so, trying to tell a story with them can be difficult because of all of the preconceptions that come with them.

It is possible to, however, write a tale in which there is something more, something slightly different that provides a focus that falls outside of the main characters themselves. Then the critical point comes to making the characters be more, act more, tell more than just what one might expect. The hard part is trying to not fall into stereotypical behaviour for them both.

She’s the world’s first succubus – rejected by Adam and banished to her own corner of the underworld. Now Lilith waits in her den of iniquity, using dozens of men to sustain her insatiable appetite. Until one day, a beautiful stranger walks into her home.

His name is Lucifer, and they share a common enemy. But to make sure this mysterious stranger is truthful, Lilith must encourage him to bare all…

Lilith’s eternal life consists of those around her sating her sexual appetites, if barely so. She exists in a gilded cage because she decided she wanted something more. She remembers the one responsible and burns in anger among the flames of pleasure. He comes looking for revenge for his choice and sees in Lilith the means to that. But is this a relationship or just two seeking to settle their score using one another? Time, and themselves, will tell.

Lilith, at least this one, needs, craves sexual moments and her life is held to that. She describes herself as a succubus, as a warning to others for what she chose. The underlying emotion in that thought make her a far better character than otherwise she could have been. In the moments between her sexuality coming to the fore and taking over, she’s intelligent, scheming to a point, but also remembers well what she has lost and why it matters to her.

Lucifer, while a core part the story as well, is a bit less well rounded out as a character. Like Lilith, there’s a strong sexual current in his character, there is a bit of aloofness, and somewhat a domineering aspect to him. While that works, I would have been more enthused if he and Lilith were more equals than how things seem to be otherwise.

The work ends on a point that obviously leads into the next work in the series. It’s a rather ominous note, but makes sense from the perspective of the main characters. I’m hoping that Lilith remains true to herself, I wouldn’t like her to change herself for the sake of a simple revenge. She’s more complicated than that, more subtle and that would be good to see. Succubi after all are their seduction and temptation, not otherwise. I hope that is where the story goes from here.

Far too much time spent on Lilith being sexual and not enough on her character. Too much time spent on Lucifer scheming and not enough on building a connection with Lilith that is more than the sex they have. Still, the undertone of the work, revenge, seems to have a purpose, and where that takes the series I will be interested in. But if that comes to be only Lilith being sexual and Lucifer gloating and watching, that will be disappointing. I’m hoping not.