A Review of Give Me Your Love by Will Garnet 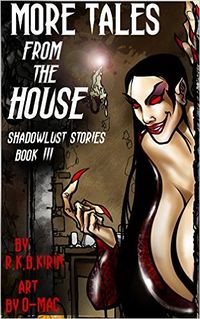 More Tales from the House by R.K.B. Kirin

A little while ago I reviewed two works by R.K.B. Kirin in their Shadowlust series. The first, Tales from the House, you can find here on the Tale. The second, Tale of the Farm, was reviewed here on the Tale as well. In each case I felt the works were stories that were well told, had the most interesting and involving characters, and gave life to a series that I felt, and still do, has a lot of promise to share.

Today’s review is of the third work in the series which returns to the two characters that begun the series and tells of them and in doing so, reveals how things were, are, and came to be. Which, for me, was deliciously wonderful by far.

Dirk finds himself trapped in a frightening bastion of the supernatural known only as the House where the beautiful and sinister Selina endlessly seduces and entices him. Surrounded by the paranormal, Dirk struggles to maintain his sanity, but Selina’s insatiable, inhuman lusts may be too much for him to withstand.

Desperate, Dirk delves into ancient books seeking answers, but how can he hope to find a way to resist Selina’s wanton charms when his own desires start to manifest themselves as his own doppelganger? Dirk’s only chance is to learn the secrets of the House, but where will those secrets lead him and what carnal mysteries will he uncover?

The time that Dirk has spent in the house is difficult to say, but he knows that something is happening to him. A mystery unfolds around him, he faces himself to find the answers, and along the way Selina awaits him.

I think this is a wonderful continuation of the first work in the series and it does, to a point, answer some of the questions that were left unanswered at the end of the first work. While the second gave another view of how this universe works and some of the beings within, the core of the series is Dirk and Selina, their relationship, and what it all means.

Following Dirk as he examines the library of the house, discovers a book there, and then what comes from that point onwards is one of the most captivating supernatural erotica scenes I have read in some time. The struggle within Dirk as the book tells a story is one thing, but when Selina appears, the heat moves from a simmer to a boil deliciously. The mix of physical and, for lack of a better term, spiritual sexually play off against each other well.

What’s most fascinating to me is that neither Dirk or Selina are really in control of what happens to them, and how those reactions play off each other reflects how little Dirk knows and what Selina knows and isn’t telling. It isn’t evil or horrific, there’s an current of desire, need, pleasure that joins the two together and works really well.

When the revelation comes as to what happened and Dirk confronts this, that interplay is very true to his character and doesn’t seem out of place or odd. Along the way something happens, the world changes and another level of the house is revealed bringing with it two new characters that have a unique relationship, but also reveals something about Dirk that I assumed, but wasn’t stated until he was confronted with it.

With each work in the series, the author’s grasp of the characters, especially Selina and Dirk, make the work read better, their voices clearer. The writing is excellent, the characters true, and the events, while odd in a supernatural way sometimes, fit well. I wish there was more about Selina’s past, or a little more time spent in the library between Selina and Dirk in an intellectual way. I found that little snippet of their time together was the most telling of all.

The questions about both Dirk and Selina are still there, the story isn’t finished I think, call this a moment of clarity along the way to understanding. Learning about the house, what Selina’s role is to those within the walls was telling. More so the struggle within Dirk was told in a voice that expressed so much about him. A tempting quandary and I look forward to where the story goes from here.