A Review of Remind Me by Nanea Knott

A Review of Succubus by Samantha Blackstrap 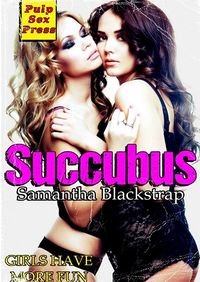 In the rush of getting to the erotica in a story, much of what otherwise could be interesting story is forgotten. The questions of who the succubus is, where she came from, and, possibly the most important one, how it was that she wound up where she is, get pushed aside.

Sometimes that can work, if the erotica has a point to it, a purpose and it is one that makes, in some way, sense in the story itself. Even then, if that works, the ending can fall flat and leave one wanting in a lot of ways…

Madeline arrives home to meet the new woman of the house, Linda. After a hot and dirty tryst she realizes that Linda is not at all what she seems. Now it’s up to Madeline to give the demon her due and vanquish the foul beast that has invaded her home. Who said demon hunting couldn’t be sexy?

Madeline comes home to her father and discovers that dad’s married someone. But things aren’t right with Linda and Madeline soon finds out that Linda isn’t human, she’s a succubus. A choice has to be made and Madeline’s in for the fight of her life.

Linda is not fleshed out well, and for the most part seems to really only be focused on her need to feed upon both Madeline and her father. There’s some vague hints and ideas about her, but they aren’t really followed through, save in passing, and that’s somewhat disappointing. There’s a story in her, but it’s mentioned in asides that don’t give her a lot of depth overall. Some of the scenes with Linda are slightly off-putting at times, and there’s a certain vibe about her that just feels wrong from the first moment.

That’s a larger problem as when the erotica comes with Madeline, it’s… awkward. There is supposed to be heat in it, but it reads as a vague sort of mind control and succubus power story that goes around in circles leading nowhere. There are moments, especially in the last few pages, where Madeline’s fight with Linda is quite telling and I liked parts of that.

It’s the ending, how abrupt it is, how the story ends with an offhand remark by Madeline’s father that made me wonder. I couldn’t quite see how Madeline, or her father for that matter, figured out how to rid themselves of Linda. That’s never explained and left a whole in the story for me at least.

There are some moments in the work where the dialog seems off. While some of that can be said to be the style of Linda’s speech, nonetheless, there shouldn’t be the oddities that there are with Madeline’s as well or her father. The work could use one more editing pass to clean up some inconsistencies within the story, but as the work seems to be hold erotica over story, that isn’t likely to happen. By the same token, the erotica needs to be expanded upon as it’s rough, quick, and doesn’t have the heat it really should for what the story is.

There’s something missing beyond the odd dialog and occasional odd writing. It’s that the story which starts comes to an abrupt halt and when it starts up again it gets buried in the erotica. Perhaps the story needs to be taken out from the erotica and allowed to develop more than it is.