A Review of the Succubus Incorporated Series by Vanessa Von Vine

A Review of Unforgettable by Nanea Knott 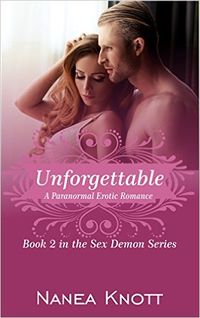 So far in the series I have been wondering about several things that have been mentioned, referred to, but not really delved into deeply.

The question of how people forget things after they are with a succubus, how that plays out exactly. What happens with others involved in that event? Another aspect is what exactly is the difference between humanity and the succubi and incubi?

Then comes the question of the mysterious group that wishes them to be no more. A lot of questions to be wondering about, but perhaps the largest one of all is, why is it so hard for succubi, and incubi for that matter, to accept when they find their mate?

A glance across the room of a golf course clubhouse had two strangers longing to meet. A phone call would interrupt their plans. Later that day Dr. Kevin Nettle scrambled to the hospital to save a hit and run victim. He’s capable, dedicated and lost. Medicine was his whole life until he followed his colleague into the emergency room.

Succubus Shelly Graham is content to live her life as it’s always been despite the growing emptiness inside her. She doesn’t remember much about the crash, only that she’s in pain and bleeding. Her only hope of healing is to feed. The young doctor treats a beautiful patient astonished by her ability to heal. He wonders why and starts looking for answers. When he finds it, he also finds trouble. There are factions at war and he and Shelly must find a way to save one another before the secret battle kills them both.

Shelly is a succubus having a really bad day. First she’s in a car accident that almost kills her. Then she finds out her doctor is her mate, then things turn even worse when she discovers that some of her friends are in trouble… and it is coming for her. For a succubus like Shelly, who is fine on her own, learning to deal with a mate is something she was never prepared for. Relationships are never easy, and when you are a succubus, they really can suck sometimes.

The most interesting part of this work was how Shelly reacted to discovering that Kevin was her mate. As strong as she is on the outside, there’s a very strong sense of insecurity for her relationship wise. But the reason for that is more of a defence mechanism to her particular succubus ability. While most of her kind have time to enjoy being with the ones they feed on, Shelly doesn’t have that luxury. It’s that difference that, for the most part, defines her character, how she sees the idea of romance, or lack of it.

Being that she thinks in this way, how things unfold between her and Kevin is a very rocky path and there are quite a few moments when I couldn’t help but sigh at the mistakes, stumbles, and how poorly she reads Kevin’s body language and actions. Even when Shelly finally accepts things for what they are, she still has a need to somehow turn away, over and over again. It’s a little sad at times, there are some very tearful moments that come too.

Kevin’s reaction to things is very real from his perspective. There is confusion, misunderstanding and what makes it worse for him is the mysterious group who are looking to remove all of the succubi and incubi appear in his life. Trying to put the pieces together, then being confronted by them, takes his character to some moments that are humorous, frightening and sometimes ill advised. Nonetheless, he is single minded, especially when it comes to Shelly and I thought how his character and Shelly’s contrast, but also are the same in a lot of ways was a lovely piece of writing.

The core of the story is what happens to Shelly and Kevin, but as this unfolds there is quite a lot of information revealed about the main plot, and side plots without giving too much away. The connections with the prequel and first book in the series are a little subtle, not taking away from the main characters. There is an appearance of a new character that draws Kevin, and the reader, into the world of those that oppose the succubi and incubi and while he appears somewhat fleetingly, he leaves a telling impression on the series.

As the work plays out, there are a few points at which there is a lot of information to be processed and we see that from Kevin’s perspective. Again, as in the prior works, it isn’t told as an info dump. How that is told works both from a story perspective and a plot one as well. Kevin asks questions that, as a reader, I have had from the beginning and understand the answers added a lot to things. The detail matters here, it might be a lot to digest, but it isn’t wasted space in the story. The explanations have to be there and they work.

There is still a lot of mystery to tell, the question of what makes the succubi and incubi different isn’t revealed. The mystery group is scratched on a bit, mainly making it clear they are not people to be taken lightly with all that happens. As for the succubi and incubi, and especially Marissa, there is a lot still unrevealed by far.

One of the things that bothers me somewhat is how arrogant some of the characters are in the series. Why they are isn’t explained, but it’s a present force when they do. I still cannot wrap my mind around how it works that when a succubus or incubus is feeding they don’t show up on recording devices. I will say that in this work, for the first time, there is a scene which graphically tells of how their powers work on humans, how it effects their memories, and it allows for some cute moments, but also a very serious one to think about, all things considered.

I only noticed one editing mistake in the work, quite a minor one really and it didn’t cause me to stumble in my reading. The characters have growth, the plot is solid and tells a very good romantic story that pulled on my heartstrings. The best moments are when Shelly tells Kevin of her past, what like is like for her and in doing so she reveals her inner self-doubt. It is a very strong piece of writing and in that moment Shelly really came alive as a character for me.

An excellent read, well enjoyed. The work adds some layers to the series to take onwards, introduces how many of the main characters fit together, and gives purpose to why things are as they are. I would have liked a bit more told of Shelly’s past, her parents. I wonder about quite a lot of the characters that appeared in this work and who will be the next to appear.

I do know of two who I have the oddest feeling are going to wind up with each other for some reason, even if they don’t like each other very much. The questions are still here, the answers are coming, along with many of the characters, and that made me smile.