Succubi Image of the Week 422

A Review of Captain Caroline: Succubus of the Seas by Tiggy Mills

A Review of The Impossible Mating by Carley Rose 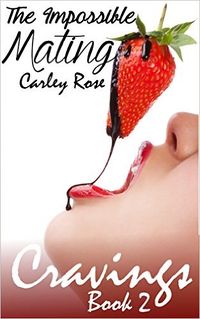 The Impossible Mating by Carley Rose

A review today of the second work in the Cravings series by Carley Rose. When I reviewed the first work in the series, I noted that there were, at least for me, several issues that I felt made the story weaker and less than it otherwise could be. One of the largest being the lack of any real direction, a telling focus on the erotica over story, and no real understanding of why things happened as they did.

With the second work I hoped for learning something more about this universe, about Elle, the succubus of the series, and why things are turning out as they did. What I didn’t expect was the author using the same cliffhanger as the first work to bring this one to a close when otherwise the rest of the work was vastly improved.

Every action has a consequence. It does not matter whether you understand it, control it, or it controls you. At some point you need to decided who you are, whether you want to give in, and what are the choices you can make. And if you take the easy way out or choose better.

Elle, or Michelle Farth, has to control her unrelenting sexual appetite while trying to solve the mystery of her parents, the only ones who can really explain what she truly is before she loses what little control she has and allows the demon inside of her to take over.

In ‘The Impossible Mating’, Gregor and Elle find themselves bound together in a way that shouldn’t be possible. That doesn’t stop Elle from taking her frustrations out on Gregor’s work buddy, letting her Demon take over and show him who’s boss. Despite how good it feels, her Human side knows it’s wrong and fights against her Demon instincts. The war between her two sides is a difficult one, as neither wants the other but they can’t live without each other, as Elle finds out the hard way.

This book also contains Gregor’s POV during the steamy scenes between him and Elle, where he realizes how much he still has to learn from the young succubus. The two might have accidently bound themselves together for the rest of their lives, but perhaps they’ll find that it’s exactly what they needed.

Elle finds herself trapped, questioned, and then locked away. Her anger, then despair take over and in doing so, Gregor finds there’s no choice but to accept that both he and she have made a choice. The thing is, where those choices take them both is a dark and dangerous place.

This part of the series uses a lot of exposition to tell what comes next for Elle, but in doing so there’s a lot of time spent on the minutia rather than the substance. Elle considers her position, what’s happening, tends to fall apart at the seams from time to time, and overall as the story progresses tends to lose herself. While a lot of that comes from the situation, there is a point where everything turns a corner and her succubus personality and drive comes out once more.

When that happens, it’s a jarring moment that turns Elle from someone to be liked to something of a heartless being seemingly only caring about dominating the men around her. That could have taken the story in a direction that, while making some sense when it was explained finally, would have been more of a turn off than a turn on.

Gregor, the werewolf of the series, has found his actions have consequences and in being so that manages to take the story away from rushing down a path to Elle becoming stereotypical in her personality and brings back who Elle is in the core of her being.

As much as that added to the story, I’m not quite sure about having to push Elle into a situation where she makes a choice with dire consequences. It felt very manufactured, a bit soap opera in how things unfolded and I don’t feel like it added anything to the story at this point. If it came later in the series when Elle did something very costly to herself and others, I could understand the depths to which she falls to. But it just doesn’t seem to work because it takes what we think we know about her and tosses it aside to allow Gregor to come to the rescue and then devolve the scene into another short hot flash.

There are three hot flashes in the work, which combined have a touch of succubus mind control and dominance that showed some possibilities, but before things become really hot, the scenes abruptly end. There is a clear difference between Elle and Gregor and the other scene, which did work however.

While a lot of time is spent in telling about where Elle goes and what she sees, there’s not all that much told about the people around her, their world and more. Even when that happened, to an extent in the story, it was referenced by a single sentence in which it was said that Gregor told Elle about Demons. But the reader isn’t told about them.

The ending of the work felt very much like a rehashing of the end of the first work in the series and it made me sigh in disappointment. As well, there’s a certain level of dark foreshadowing in that ending that made me shake my head because it was stereotypically so and in being that way I felt took the gains of the story and didn’t go anywhere with them. Elle is on the edge of some real answers, but they don’t come, even if she does. Rushing away from that point, from some character development to only put her in danger seems a lost opportunity. I hope not when the next work in the series comes because I like the series overall, it is the little things that nibble at my enjoyment.

Writing wise, the dialog was less stilted, more natural, and felt like the characters were talking to each other and not so much at each other as they were in the prior work. There are some oddities, and I think the one that keeps bothering me the most was humans begin referred to as “Humon” which caused me to be thrown out of the story every time that came along. Most fans of television science fiction will know of the particular alien race with huge ears that pronounce “human” in that way and will understand why it bothered me so much.

In spite of a lot of character development, a good deal of exposition over the main characters and their world, the ending was a retread of the prior work and that was really disappointing. As well, the entire moment of Elle “giving up” really came at a point that felt wrong, didn’t work too well and was confusing until the other side of that moment, through Gregor was seen.

There still seems to be promise, but Elle needs to get from going down the path of being stereotypical when all is said and done and being who she is. That’s a fight, and how that plays out matters. Hopefully the next work in the series will not cause the series to derail.