A Review of The Impossible Mating by Carley Rose

A Review of Captain Caroline: Succubus of the Seas by Tiggy Mills 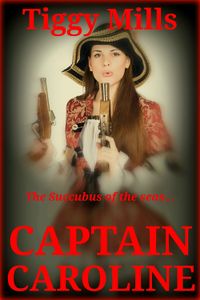 Captain Caroline: Succubus of the Seas by Tiggy Mills

A review today of a work that, in truth, doesn’t have a character within the pages that is a Succubus. There is no supernatural aspects, nothing to suggest that the main character is anything other than completely human as the story goes on.

However, being human also means that one can, in some ways, have aspects of the behaviour of a Succubus within them. That can be in their sexual needs, for one, and in another it can reflect their animal instincts in more ways than one. Sometimes that can lead to a legend being formed and a label placed upon them. For all good myths must have a name to go along with them…

In the 1700s, Lady Caroline Darcy is on board the navy ship Mars secretly eloping and bound for the new Americas. She is undoubtedly young, beautiful, headstrong and deceitful…and the only girl on a ship full of lusty sailors under the rule of brutal, dictatorial, Captain Brigham. Mutiny, malevolence, mayhem and sexual debauchery abound, but perhaps surprisingly the real villainess is as yet to be discovered; that is until fate and destiny lends a hand and sets, Lady Caroline on the devilish, libidinous and cruel path no one would or could have ever foreseen or predicted.

What defines a phantom or where does a ghost story begin? Sometimes it is with just an innocuous stroll up a gangplank towards an illicit, promised, new and better life. ..

Tiggy Mills gives her unique, salacious take on sea and pirate life in the distant past and creates a deliciously new, sexually rapacious, scourge of the seven seas. Accurately, graphically recorded and with more sexual twists or turns than there are fish in the notorious Caribbean ocean, where legend has it, Captain Caroline still roams to this very day. For those of you with a faint heart stop now…but for the courageous then read on and prepare to be terrified, aroused and amazed.

There is a legend of Captain Caroline, known as the Succubus of the Seas which is told in whispers among the waves. But all stories come from humble beginnings and then, over time, the truth is as mysterious as the myth that comes afterwards.

The work is a quite well told story of adventure on the seas, following Caroline as her plans are turned into dust and then she finds her own measure of strength within herself to deal with a world of the sea, pirates, and all that comes with them. Her transformation as the story unfolds is quite amazing, and does not feel out of place, or odd, in the context which it is set in. Going from a cultured, somewhat restrained youth into a legend is a very convoluted path to take, but each moment along the way builds upon the last and there’s a certain continuity within the work that allows suspension of disbelief to happen very easily.

That is not to say that Caroline’s life is simple, it isn’t, or that this is a story where the main character, for lack of a better phrase, sleeps her way to the top. Caroline changes as the world around her does, surviving in a world where a woman would never normally last long as a pirate. How she survives makes the connection to her being called a succubus. Her sexual needs are very strong and there is, as the story goes on, the evidence to why she would be called a succubus. Needless to say, few manage to escape her when she is done with them. The ones that do make an interesting comment about Caroline which lays the last piece of the puzzle together and gives rise to her myth and her name.

The work is violent at times, but that is a reflection of the time told. Battles and pirates, and the seas in the 1700s were that way and there isn’t anything that seems out of place or unreasonable in the setting or characters as a whole. There is quite a lot of erotica as well, themed to the time, and because it is written as such, there aren’t any moments in the erotica where something is said, or done, that is out of place or wrecks the mood and tone of the work.

Well written with a solid plot, well fleshed out characters and nothing remains static as the story unfolds. The characters develop, some in unexpected ways that are quite surprising at times, but also telling about themselves as well. A solid adventure with just enough erotica to provide a means for Caroline to come to her own.